The 72nd annual Golden Globe Awards took place last night, and with comedians Tina Fey and Amy Poehler setting the tone and pace as hosts, it was an evening full of incredible moments. Their hilarious bits helped keep the mood of the evening fun and light – even when taking jabs at Bill Cosby – but one of the most notable parts of the evening was a more serious one, when Jill Soloway accepted her award for Transparent.

Transparent, created by Soloway and starring Jeffrey Tambor, is a television series about a Los Angeles family and their lives after their father comes out as transgender. Tambour plays Maura Pfefferman, who is in the process of transitioning during the first season of the critically acclaimed show. Tambor took home the award for Best Actor in a Television Series for his role in Transparent, and the show also won the award for Best Television series. 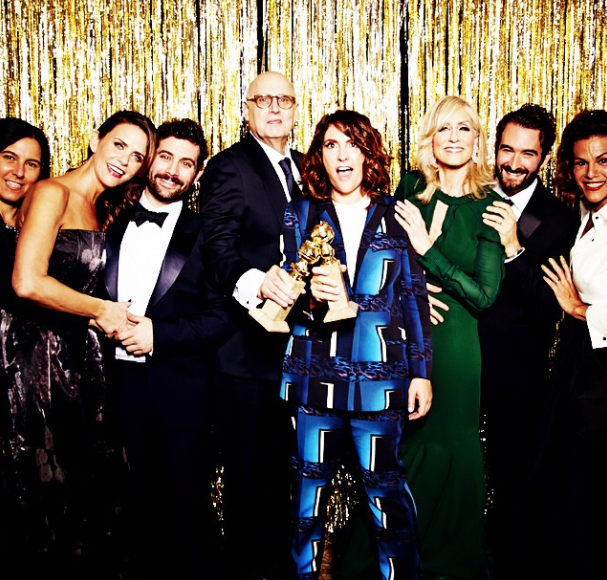 Jill Soloway and the Transparent crew pose for the cameras after the awards show. Image: via Instagram.

In her acceptance speech, Soloway thanked the cast and everyone who helped make the show possible. More notably, she gave a big shout out to the greater transgender community, mentioning Leelah Alcorn and her own transgender parent, who came out to Soloway and her family in 2011. At the end of her speech Soloway said,

I want to thank the trans community. They are our family and they make this possible. This award is dedicated to the memory of Leelah Alcorn, and too many trans people who died too young. And it’s dedicated to you, my trans parent, my “mapa,” if you’re watching at home right now. I want to thank you for coming out because in doing so you made a break for freedom, you told your truth, you taught me how to tell my truth and make this show, and maybe we’ll be able to teach the world something about authenticity and truth and love. To love.

Some people have criticized Hollywood for honoring Tambor with the award for Best Actor when there are actual transgender actors like Laverne Cox who continue to go unrecognized. However, there is no denying that Transparent is a groundbreaking series that lends visibility to transgender identities. It is an important, courageous show and Transparent, and Jill Soloway, are very deserving of this honor.