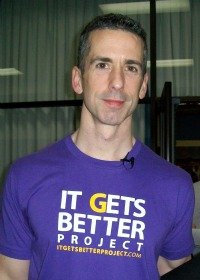 Dan Savage became popular for his snarky, sharp sex-column in the Seattle paper, The Stranger. He became notorious for his frank politics, his biting opinions, and his ability to polarize. He has become a leader in the gay community, however, for standing up to LGBT bullying and teen suicide. In 2010, Savage and his husband co-founded a project called the  It Gets Better Project, a project for which adults, gay or straight, submit videos of support and encouragement for struggling young teens. Some of the prominent names who have submitted positive videos are President Obama, Chris Colfer, Adam Lambert, and Lady Gaga.

Read the rest of his profile here.