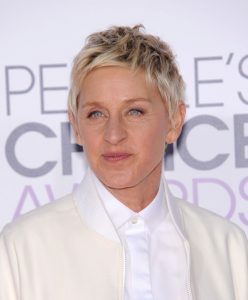 Talk show host and LGBT icon Ellen DeGeneres is under fire for defending fellow comedian Kevin Hart amidst one of the biggest controversies Hollywood has ever seen.

The scandal began last month, when Hart announced that he would be hosting the 2019 Oscars. The announcement was met with disdain after newly resurfaced tweets showed that the comedian had made homophobic remarks in the past. The Academy of Motion Picture Arts and Sciences gave Hart an ultimatum: apologize or the position will be given to someone else. Hart refused to apologize.

In a recently aired interview, DeGeneres expressed her support for Hart by encouraging him to reconsider hosting the Oscars. She even went as far as to call the Academy of Motion Picture Arts and Sciences to vouch for him.

“I called them, I said, ‘Kevin’s on, I have no idea if he wants to come back and host, but what are your thoughts?’ And they were like, ‘Oh my God, we want him to host! We feel like that maybe he misunderstood or it was handled wrong. Maybe we said the wrong thing, but we want him to host. Whatever we can do we would be thrilled. And he should host the Oscars.'”

In response, Hart said that he is considering reprising his role.

LGBT activists immediately took to Twitter to voice their dismay.

“Why didn’t you bring Black gay men, the ones who the comments were about, on the show?” Twitter user @PrestonMitchum asked. “How do you, a white woman (@TheEllenShow), decide who gets to receive an apology where you were never the target of the comments? Y’all have got to start using privilege correctly.”

DeGeneres argued that Hart’s comments were due to a lack of education, and he should be forgiven his previous transgressions.