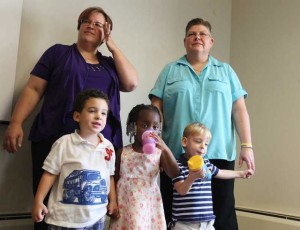 Lesbian moms April DeBoer and Jayne Rowse, from suburban Detroit, announced their challenge to Michigan’s constitutional ban on same-sex marriage with their three children at a news conference.
http://lgbtweekly.com/2012/09/09/lesbian-couple-with-children-battling-michigans-adoption-laws-now-also-first-to-challenge-states-2004-marriage-amendment/