You’re probably familiar with this scene: a woman is approached at a bar or coffee shop and is aggressively pursued by a complete stranger. This stranger asks for the woman’s phone number so that he may contact her after this initial exchange, and instead of saying no, the woman gives him a fake phone number. Though this scene is one experienced by many women (and men) in real life, it has also become a kind of punch line over the years in film and television. We’ve seen our friends give out fake numbers, we’ve seen popular characters do it; we’ve done it ourselves.

Although many of us have done it, it’s somewhat difficult to pinpoint the reason why giving away a fake number always seems like an easier thing to do than simply saying, “I’m not interested.” Some feminist activists explain that in a day and age when young men like Elliot Roger will murder innocent people because their access to women’s bodies was denied, and in a day and age when rape culture is so present around the world, many women feel safer giving away a fake number than outright denying this kind of request. 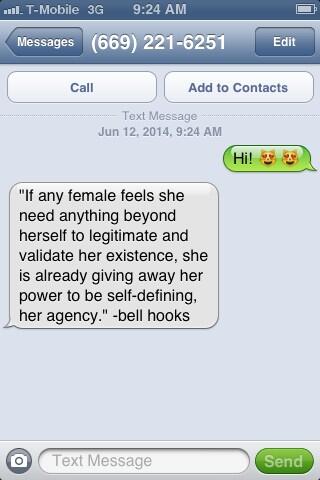 If you don’t feel comfortable saying no in these kinds of situations but still want to maintain your sense of agency, there is a new solution just for you: the “Feminist Phone Intervention Hotline.” Also known as the bell hooks Hotline, named for feminist and author bell hooks, the Hotline was created to drop “some feminist knowledge” on anyone who calls or texts the number. As Forbes’ Alicia Adamczyk explains, the bell hooks Hotline was “designed to thwart communication from ‘unwanted suitors,’ a la the Rejection Hotline.”

Now, instead of having a fake phone number lead an unwanted suitor to a static receiving end, they will get an earful of feminist wisdom from bell hooks. For example, one of the texts might read: “‘If any female feels she need anything beyond herself to legitimate and validate her existence, she is already giving away her power to be self-defining, her agency.’ –bell hooks.” Other auto-texts and voice messages will speak more about female agency, misogyny, and violence against women via actual bell hooks quotations.

Learn more about this awesome project by visiting Feminist Phone Intervention on Tumblr.