Former Disney Channel child star and pop sensation Demi Lovato has just added one more title to her impressive list of accomplishments: Grand Marshal of the 2014 Los Angeles LGBT Pride celebration. Last month, Lovato joined the LA Pride Parade as its honorary Grand Marshal and gave a special performance. Awesome, colorful footage from her live show at LA Pride has since been turned into the music video for her song “Really Don’t Care,” and the result is a prideful, energetic video that is truly emblematic of personal strength and empowerment. 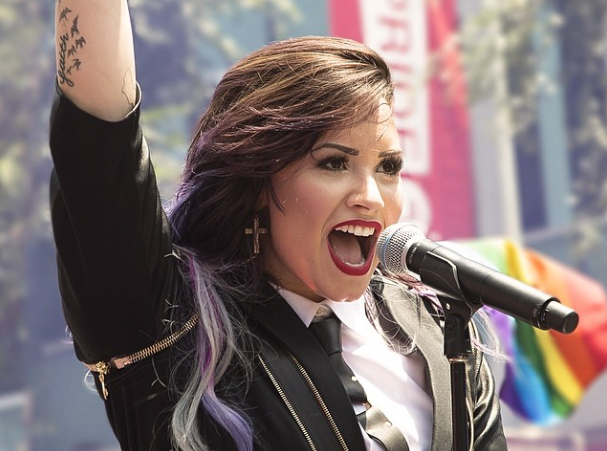 Some feel that it is a bit controversial that Lovato was chosen as Grand Marshal for LA’s Pride festivities considering that she isn’t LGBT-identified, but the young pop star has been an outspoken advocate for the gay rights movement. As LA Pride producer Patti DiLuigi notes, “Demi Lovato is an amazing role model for today’s youth, both LGBT and non-LGBT, for her activism in the area of equality, positive messaging on body image, and level of openness with her struggles. As a community, we’re fortunate to have an ally like Demi,” of the ways in which Lovato has truly become a strong ally for the LGBT community.

Earlier this year, Lovato opened up about her own grandfather’s coming out, and has been very transparent about her belief in equality, compassion, and respect for all people. “It’s such an honor to be a part of both LA and NYC PRIDE celebrations this year,” explained Lovato, of her performances for Pride events from coast-to-coast. “I have been an active advocate of the LGBT community and am wholly committed to supporting individuality and being comfortable in one’s own skin. I am thrilled to be a part of both events as they are a wonderful celebration of independence and self-confidence,” she says.

It’s really fantastic that the singer was able to incorporate her experience at LA Pride into a music video that would reach audiences on a really mainstream level. Demi Lovato joins the ranks of celebrities that are using their star power to stand up for those who aren’t being advocated for enough on a public, national level.