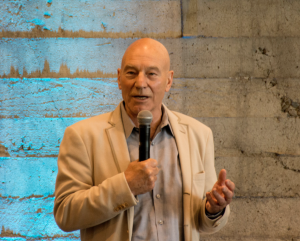 It is no secret that Sir Patrick Stewart is a strong advocate for LGBT and women’s rights, the latter hitting particularly close to home for the acclaimed actor. As a child, Stewart grew up in a household plagued by domestic violence; his father brutally beat his mother on many occasions, and he felt powerless to stop it. The actor has been very open about his experiences as a young boy forced to grapple with his inability to protect his mother, and as an adult he has used his celebrity to bring attention to issues of sexual assault, domestic violence, and the dangerous culture of victim blaming that shames the targeted women of these crimes.

Through the work he has done with women’s rights and safety organizations such as the UK’s Refuge, Patrick Stewart has inspired many women to stand up against domestic violence and has helped survivors get the support they need. More importantly, Stewart has spoken out about how men need to take accountability for their actions and the actions of others, and has explicitly stated that violence is never the answer. He has worked with the United Nations, the Ring the Bell project, and other organizations to get the word out about domestic violence.

After to listening to Stewart speak publicly about issues such as sexual assault, domestic abuse, and equality and safety for everyone, it is clear that his personal experiences have greatly shaped the activist that he has become as an adult. It is so important for celebrities like Stewart to use their agency and influence to help create a more equal world. Learn more about Sir Patrick Stewart and the work he does to better the lives of others in our full profile of the remarkable activist.

Be sure to watch the video below to hear Patrick Stewart speak out against domestic violence in his own words.