Virginia Really Is Love For Lovers: The Fight for Marriage Equality Wages On 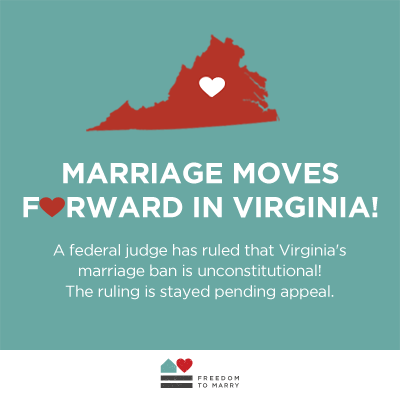 Earlier this month, same-sex couples all over Virginia were blessed with some truly good news: a federal judge ruled the state’s current ban on same-sex marriage unconstitutional. “We have arrived upon another moment in history when We the People becomes more inclusive, and our freedom more perfect,” stated Judge Arenda L. Wright Allen in the February 13th ruling. Reportedly, the ruling overturned a 2006 constitutional amendment preventing same-sex couples from marrying, as well as states that Virginia must respect same-sex marriages that were carried out legally in other states.

This is another instance of much-needed momentum for marriage equality, which has been somewhat consistent since the strike down of DOMA back in the spring. According to Freedom To Marry, “it’s been a big year for the freedom to marry in states across the country – Judge Allen is the fifth federal judge in the past two months to rule in favor of the freedom to marry.” Many states have felt the pressure to amend their legislature pertaining to same-sex marriage as a result of the activism and shifting social perception of LGBT issues.

Many cases like the most recent one in Virginia have attracted national attention; decisions like the one that Judge Allen made are indisputably impacting the pulse of national marriage equality politics. Another factor that has allotted this case maximum exposure is how the American Foundation for Equal Rights (AFER) joined the private lawyers in Norfolk, VA. AFER’s bipartisan attorneys Ted Olson and David Boies were instrumental in overturning California’s Proposition 8; led by the likes of Ken Mehlman, Dustin Lance Black, and Jonathan D. Lewis, AFER has continued to be a formidable force for marriage equality in the United States.

For more information about the marriage equality case in Virginia and equal rights progress being made in other states, visit Freedom To Marry.