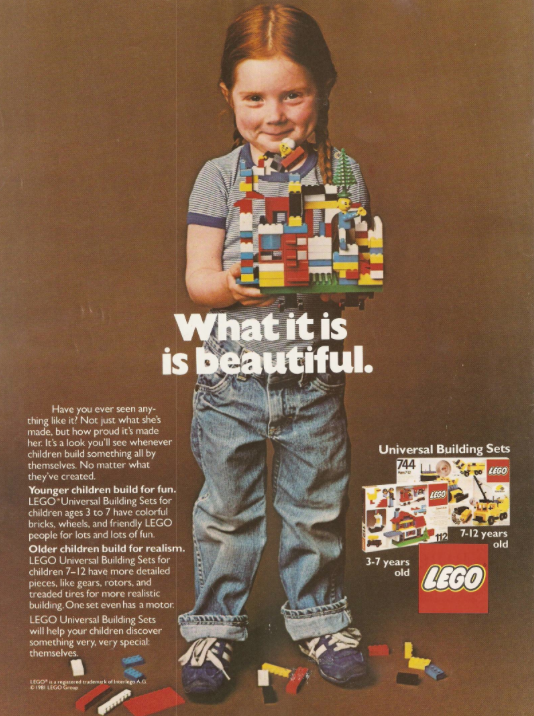 Why can’t modern day advertising look like this?
Image: via www.huffingtonpost.com

Last month, Jessica Samakow shared a photograph of a 1981 Lego ad in an article for The Huffington Post that quickly went viral. The image is unlike mostly everything we see in advertising today, in that it depicts a young girl, dressed in a blue t-shirt, jeans, and sneakers, proudly holding up a Lego creation. There is no trace of pink in the ad, other than the child’s subtly rosy cheeks. Layered over her are the bolded words: “What it is is beautiful,” and a description that muses, “Have you ever seen anything like it? Not just what she’s made, but how proud it’s made her. It’s a look you’ll see whenever children build something all by themselves. No matter what they’ve created.”

What happened to this kind of gender-neutral advertising? To images of young girls creating, exploring, and playing actively, rather than passively? Overly gendered toys typically suggest that girls should be focused on being maternal, domestic, and making themselves look pretty, while boys should be working with their hands, building, and learning. With these messages in mind, it’s no wonder that young girls become discouraged when confronted with math and sciences; men make up nearly 90% of technology and engineering fields, massively outnumbering their female counterparts. Happily, as evidence of a STEM gender gap pervades, many are fighting back and doing something about it.

“Goldie Blox,” created by Stanford graduate Debbie Sterling, is an independent toy company that is working hard to kick down the toy industry’s gender binary. Rather than only designing toys such as dolls and cooking sets for girls – decidedly passive toys – Goldie Blox offers something similar to what that 1981 Lego ad promoted: girls creating, doing, learning, and exploring using toys. Goldie Blox encourages those who use it to invent and build, and offers “toys for future innovators.”

During the 2014 Superbowl, one of the most watched television events of the year, Goldie Blox had a chance to steal the show momentarily with a compelling commercial about its newest toys. The brand featured an empowering message, illustrated by dozens of girls happily ridding their homes of their “girl toys.” Hopefully, the message was able to make consumers consider the toy industry in a different way, and to realize that young girls deserve more, that they deserve to be challenged and inspired.

What do you think about Goldie Blox? Is this brand and its message a mere nod to gender-neutral advertising or a real tool to inspire young girls?