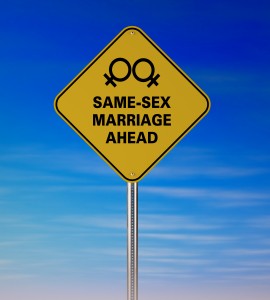 The months following the strike down of DOMA have been filled with a more hopeful approach to creating change. Small victories have continued to make headlines for the gay community, and while there is still much work that lies ahead before same-sex marriage is allowed in all 50 states, the fight has certainly gained critical momentum.

This momentum recently sparked a conversation in New Jersey, where Judge Mary Jacobson of the State Supreme Court in Mercer County ruled that the state must allow same-sex couples to wed. According to Judge Jacobson, failing to allow couples to marry robs them of newly earned rights guaranteed by the federal government, Newsmax reports. In a segment from Newsmax, host Steve Malzberg discusses the momentum the gay rights movement is experiencing with legal analyst and attorney Kendall Coffey, who is positive that these state-specific victories will continue.

Coffey explains, “I think the vast majority of courts that reach this issue are going to rule in favor of allowing gay marriage.  It’s the general sense of momentum. Based on all court rulings across the land, that’s the way it’s going,” touching on the optimistic outlook for the gay community. Newsmax reports that Judge Jacobson’s ruling “is the first time a court has struck down a state ban on same-sex marriage as a result of the Supreme Court’s ruling on the Defense of Marriage Act in June.” Coffey explains that from a legal standpoint, it was a matter of an equal protection violation in the case that went to trial before Judge Jacobson. Both Coffey and Malzberg note that this is probably not the last time we’ll see this kind of court-based action in defense of same-sex marriage.

Although same-sex couples cannot legally wed in all 50 states, there is no denying the momentum that the gay rights movement in experiencing right now. We look to the future through a more hopeful lens, knowing that with more pressure, and patience, the continuous small victories will result in a more equal world.