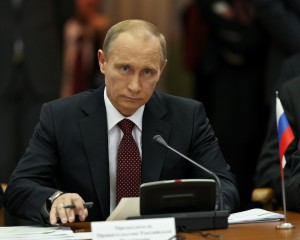 With each new day, it seems the fight for marriage equality and gay rights are making giant strides forward.  It’s sometimes easy to forget, when living in a progressive society, that there are still many people vehemently opposed to these ideals.  Vladmir Putin is one of them.

Mr. Putin has made it his personal mission to see to it that no child will ever be adopted by a gay couple.  He signed a law banning adoption of Russian-born children not only to gay couples but to any couple or single parent living in any country where marriage equality exists.

Further, he has legalized the detainment of foreigners suspected of being gay or pro-gay.  Russia may hold those “suspects” for up to 14 days.  No word on how he will be able to prove these people are gay or pro-gay.  He even deemed “homosexual” propaganda as pornography with vague wording that could subject anyone arguing for tolerance or educating children about homosexuality to arrest and fines. Putin’s position is certainly not helping Russia’s reputation around the world.

It turns out people have noticed and are taking action.  Countries such as Denmark and the United States are beginning to protest Russia’s repressive policies.  However, the fight sometimes gets turned into a fight over the definition of marriage.  Ken Mehlman has an interesting view on the matter.

“I think that the biggest argument to make to folks is one: we’re talking about, in fact, civil marriage. This is not a threat to anybody’s sacrament or anybody’s religious freedom, and we’re going to stand up for that…All of those goals, which religious conservatives have argued for over the years can be achieved by allowing more people to get married, and doing so in a way that also protects religious freedom, which is what civil marriage does,” said Ken Mehlman.

However, just being conservative is not the factor which most determines your attitude toward gay rights.  As it so happens, it may be your age.

According to Ken Mehlman, “If you stopped and you said, ‘What’s the biggest indicator of where someone stands on this issue?’ It actually wouldn’t be if they are religious or not, or if they are conservative or liberal, or republican or democrat; it’s their age. There was a recent ABC News Washington Post poll: 64 percent of millennial evangelicals, which is to say people born between 1980 and 2000, supported marriage equality. That’s a pretty interesting statistic to me.”

So, it may be the case that the new generation will usher in marriage equality and equal rights more readily than their parents.  That’s something to be proud of.