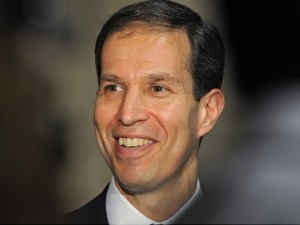 Ken Mehlman has been in politics for a long time: he has been active and influential in the Republican party since the early 2000s, and after working as the field director for George W. Bush’s 2000 presidential campaign, he became director of the White House’s Office of Public Affairs. In 2005, he became the chair of the Republican National Committee, one of the highest positions one can enjoy in the party. For much of his career, however, Ken Mehlman kept his personal life private.

But Ken Mehlman came out in 2010 he decided to make up for lost time. He instantly became the most prominent gay figure in the Republican party, and he has used his position to fight for equal rights, same-sex marriage, and the repeal of “Don’t Ask, Don’t Tell.” When New York was poised to vote on same-sex marriage, Mehlman persuaded many of the leaders of the Republican-controlled New York legislature that it benefited their party to vote for same-sex marriage. He then quietly met one-on-one with many of New York’s most influential Republican lawmakers in order to convince them, using poll data and savvy arguments, that they needed to vote in favor of the bill. The campaign he had worked so hard for was successful, and on July 24th, 2011, same-sex marriage became legal in New York state. Ken Mehlman powered on to raise approximately $3 million for similar campaigns in New Hampshire, Maryland, and Washington state, all within two years after coming out. He then went on to found Project Right Side, a research organization aimed at improving the political environment for LGBT issues.

Dustin Lance Black, the writer of the popular film Milk, explained that “Ken represents an incredible coup for the American Foundation for Equal Rights … As a victorious former presidential campaign manager and head of the Republican Party, Ken has the proven experience and expertise to help us communicate with people across each of the 50 states.” Ken Mehlman is good at what he does, and whenever he commits to influencing his fellow GOP party members to vote for LGBT rights, he succeeds. He was instrumental in the repeal of “Don’t Ask, Don’t Tell”, and he continues to advocate tirelessly for his peers.

Today, Ken Mehlman works at KKR & Co L.P., a private equity firm in New York, where he is in charge of global external affairs. He was also recently elected Chairman of the Private Equity Growth Capital Council’s Board of Directors, making him responsible for expanding the PEGCC’s outreach and education efforts to stakeholders. He remains busy in the equality movement as well, as he is on the board of the American Foundation for Equal Rights (AFER), and continues to utilize his unique position as a gay, prominent Republican to politically support the LGBT rights movement.  He recently spoke at Harvard’s inaugural LGBTQ conference, urging students to be confident in their own identity.

“There’s nothing more powerful than coming out and being who you are,” he explained.