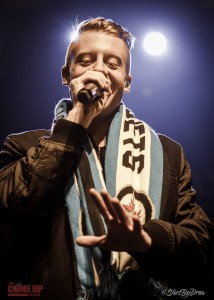 Macklemore’s music is full of social messages.
Image: Drew / The Come Up Show

Many people believe that entertainers and celebrities can use their high profile status to impact social change with their art. Musicians like popular rapper Macklemore are held to a high standard because people listen to what they say, or in this case, rap about.

MTV just released its list of nominees for this year’s annual Video Music Awards airing on August 25th, and naturally, Macklemore was among them. He’s an artist whose intelligent and socially conscious rap attracts a mainstream audience. His lyrics are riddled with wit and humor, and songs like “Same Love” jump off of his records and into social discourses, often surprising fans with his honest approach to topics like same-sex marriage. It’s clear where Macklemore stands on the issue, and because of his mainstream appeal, many have followed his example and taken a stand for marriage equality.

Because of its clear social message, “Same Love” has become a sort of anthem for the gay rights movement this past year, so it’s no wonder that it has also been nominated for MTV’s “Best Video with a Social Message” at the VMAs. The rapper will go head-to-head with Justin Timberlake at the music awards show this summer, as they both lead the group of nominees with six nominations each. Macklemore has also been nominated for “Best Hip Hop Video,” and “Video of the Year,” among a slew of others, but the attention that “Same Love” has been receiving is really prolific.

In the song, Macklemore raps that there’s “no freedom until we’re equal/damn right I support it,” using the song as a platform to show his support for marriage equality. A rap song is an unlikely place to find such a controversial social message, but the visibility that Macklemore has lent to the LGBT community is one way that the performer has used his celebrity status to endorse a cause that he believes in. Most importantly, “Same Love’s” MTV Video Music Award nomination proves that the public is listening.

For more information about the performer, visit our full Macklemore profile.