Nils Pickert: Daddy in a Skirt

Nils Pickert is up for “Dad of the Year,” at least according to Gawker. The German dad is the proud father of a five-year-old boy who just so happens to like girls’ clothing more than boys’ clothing. That didn’t seem to be much of a problem when the two lived in West Berlin, but since moving to a smaller, more “traditional” village things have changed. 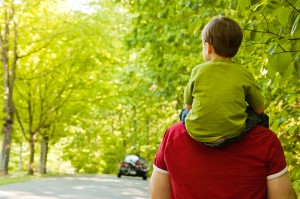 Nils Pickert wanted his son to feel comfortable being himself, no matter who that was.
Image: Shutterstock

A little boy wearing dresses was scandalous to residents of the village, located in southern Germany. But Pickert didn’t want his son to be told how he “should” dress according to society’s traditional gender roles. He wanted his son to be himself.

“I didn’t want to talk my son into not wearing dresses and skirts,” he wrote in an article for German feminist magazine EMMA back in August. “He didn’t make friends in doing that in Berlin already and after a lot of contemplation I had only one option left: To broaden my shoulders for my little buddy and dress in a skirt myself.”

That’s right: he started wearing dresses and skirts, too—just to make his son feel better. In a follow-up article he wrote for the Huffington Post, Pickert admits that he doesn’t particularly enjoy wearing women’s clothing, but says he’s willing to do it for his son’s sake.

“I’m like a soccer mom who doesn’t love the sport—but does love her kids. I couldn’t care more about my boy being a happy, self-assured, compassionate person. I couldn’t care less about the choices he makes on the way to becoming that person—as long as they cause no harm to himself or others. The ability to make these choices is his birthright—a right that I should help him to exercise, since I am responsible for his birth.” 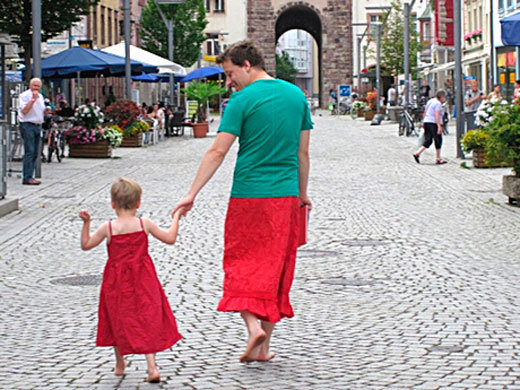 German father Nils Pickert wears a skirt to encourage his son to be himself.
Photo: EMMA

In allowing his son to make his own choices, Pickert is letting him become the person he wants to be—not the person society tells him he should be. He’s also letting his son know that it is okay to be different. And that’s so important.

“And what’s the little guy doing by now?” Pickert wrote in EMMA. “He’s painting his fingernails. He thinks it looks pretty on my nails, too. He’s simply smiling, when other boys (and it’s nearly always boys) want to make fun of him and says: ‘You only don’t dare to wear skirts and dresses because your dads don’t dare to either.’ That’s how broad his own shoulders have become by now. And all thanks to daddy in a skirt.”