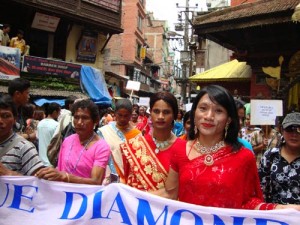 Recent months in Nepal have shown a worrisome trend—more arrests, harassment, fines, and fear among the LGBT community. Nepal has been very progressive in changing laws and attitudes about LGBT people and safeguarding their rights; it has been a significant force for good in the past. But now the LGBT community is experiencing some major problems while the government remains silent.

Individual members of the LGBT community have experienced an increased number of threats, from text messages to phone calls to being physically followed by people wearing masks. They’ve been forced to say negative things on camera about the nation’s largest LGBT organization, Blue Diamond Society. They’ve been held up for money or sex. They’ve been arrested under the Public Offense Acts. They’ve even been kidnapped and beaten.

“The LGBT rights movement in Nepal is a regional and international leader but is under serious threat,” said the director of the LGBT Rights Program at Human Rights Watch, Graeme Reid. “While Nepal has made immense progress on LGBT rights in the past decade, the government cannot afford to ignore the many problems facing LGBT people inside its borders.”

The Blue Diamond Society has had multiple staff members report threats against them, and reportedly asked the police department to investigate further. But so far, no investigations have been made and no punishments have been carried out. This is a major problem not just from the human rights aspect, but also from the aspect that normal operations—such as HIV prevention outreach—can’t take place with such threats ongoing.

The Blue Diamond Society also faces allegations of corruption from the news and, assumedly, the forced video recordings. Its bank accounts were frozen and its license renewal has been halted, with the government conducting a formal investigation. A report on the organization’s supposed corruption was to be published, but after several months there is still no word. And meanwhile, according to HRW, it has successfully passed several audits and inspections from its international donors.

Nepal last month hosted a seminar on sexual orientation, gender identity, and human rights. It was applauded for its progress and positive policy changes in past years, yet recent threats, investigations and attacks continue.

“The government needs to end the harassment against LGBT people and groups, which risks undermining the human rights and HIV/AIDS prevention and treatment progress the country has achieved,” said Reid.