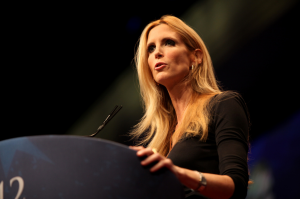 Last Thursday, October 11th, was National Coming Out Day—a day for LGBT community members to speak up, have their voices heard, and come out to friends and family. And while more and more people are standing up to fight for LGBT rights, not everyone has renounced traditional beliefs.

Ann Coulter, the well-known conservative political commentator, made a tweet that fell flat on Monday. She tweeted, “Last Thursday was national “coming out” day. This Monday is national “disown your son” day.” And while it may have seemed like a clever joke to her, it’s not really funny, is it?

According to Opposing Views, about 50% of LGBT youth are rejected in some way by family when they come out. Somewhere around 100,000 LGBT youth are homeless. And “LGBT youth that are completely rejected by their parents are more than 8 times as likely to have attempted suicide.”

The fact that Coulter makes a joke of such a serious matter as family rejection only serves to create more harm and make light of something that is truly devastating to many of our LGBT youth. And it’s the last thing that they need—especially so soon after National Coming Out Day.

Familial rejection shouldn’t be normal or expected when LGBT youth come out—it’s a stigma that needs to change. This Friday, October 19th, is Spirit Day. In lieu of Coulter’s comments, millions of Americans are standing up in support of LGBT youth by “going purple.”