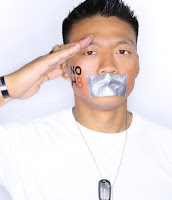 When Daniel Choi was discharged from the military because he publicly came out as gay, he had a choice: he could quietly accept his fate, or he could speak out. The choice was easy: Daniel Choi wrote an open letter to President Barack Obama, begging not to be fired and pleading for the President to repeal “Don’t Ask, Don’t Tell,” an arcane, discriminatory policy. Thus Choi became the face of a movement.

It has been almost a year since the infamous “Don’t Ask, Don’t Tell” policy was repealed by President Barack Obama, but that doesn’t mean that Daniel Choi is relenting an inch in his campaign for equal rights. Read the rest of his profile here.