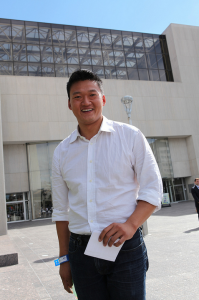 On June 29th, 2010, Daniel Choi was discharged from his position as an infantry platoon leader in the New York National Guard. He was discharged because he had come out publicly the year before, violating the U.S. military’s long-time policy of “Don’t Ask, Don’t Tell.” That’s when he decided to fight back. Since that moment, Daniel Choi became one of the most visible faces of the campaign against “Don’t Ask, Don’t Tell” as he fought to keep his position in the army and to be able to serve openly and honestly. He fought alongside organizations like Knights Out, a group of West Point alumni who oppose the “Don’t Ask, Don’t Tell” policy, and the Courage Campaign, a progressive advocacy organization that supported his fight.

Choi wrote an open letter to President Obama and Congress, calling his discharge “a slap in the face” and begging, “Do not fire me. Do not fire me because my soldiers are more than a unit or a fighting force –- we are a family and we support each other. We should not learn that honesty and courage leads to punishment and insult.” He continued to protest the policy tirelessly, speaking at rallies, staging hunger strikes, and more than once chaining himself to the White House fence.

In late May of 2010, the House passed an amended bill that would repeal the “Don’t Ask, Don’t Tell” policy. In mid-December, the Senate passed the measure, and President Obama signed the bill into law on December 22nd, 2010; Daniel Choi was there to witness the repeal that he had worked so hard to win. The repeal of this 17-year old repressive policy represents a massive breakthrough for gay, lesbian, transgender, and bi men and women who simply wished to serve their country openly and honestly. Daniel Choi has submitted a request to rejoin the U.S. army, but he knows his work isn’t done: “The mission is not finished; it has only just begun.”