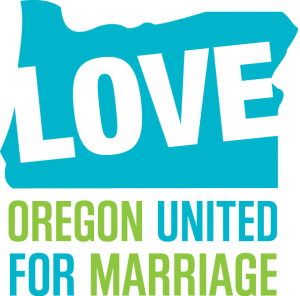 With so many states jumping on board to support marriage equality, it’s still hard to believe some states have not approved it yet.  Oregon is one of many states that hasn’t yet legalized same-sex marriage.  Fortunately, there is a group fighting the good fight to change that.  They are known as Oregon United for Marriage.

It is their fundamental belief that marriage is something that should be allowed for anyone who wants it.  They believe “marriage and family are about love and commitment, working together, bettering the community, raising children, and growing old together.”  They believe in the value of freedom and equality for all, in Oregon, and around the world.  However, right now they are just working on Oregon.

They would like to see marriage legalized for lesbian, gay, bisexual and transgender people.  They say that legalizing it would lead to stronger family bonds, healthier relationships, legal protections and increased workplace safety.  They want all the voters in Oregon State to support the freedom to marry for committed same-sex couples.

Oregon United for Marriage is working to build up a group of individuals and organizations to help win the freedom to marry.  They have invited “business, labor, progressive, and nonpartisan organizations, communities of color, people of faith, current and former elected officials, students, business and community leaders, Republicans, Democrats, Greens, Independents, and Libertarians to join (their) coalition.”

They ask you to have conversations with family, friends, neighbors and co-workers about why the freedom to marry matters.  They may not know how you feel about it.  Tell them.