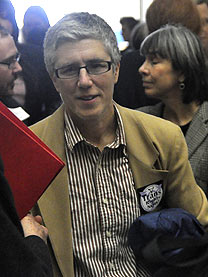 Jennifer Levi is tough on the law.  She fights for the rights of LGBT people each and every day.  Levi, a law professor at Western New England University, recently won the Dan Bradley Award, the highest honor granted by the LGBT Bar Association.  She is known for her civil rights work for lesbian, gay, bisexual and transgender individuals in numerous cases.

She has worked to argue the Massachusetts same-sex marriage case and challenged the state’s sodomy law, establishing important protections for children of same-sex couples.

Since Jennifer Levi joined GLAD in 1998, all six of the New England states adopted statutory antidiscrimination protection in place for transgender people.  She was instrumental in drafting statutes and testified in court cases at all state-court levels.  She does not shrink away from a challenge.

“Some of the professors I respect most and learned the most from were ones with whom I strongly disagreed. They made me think hard about what I believed and helped me learn to express my thoughts clearly and persuasively. It’s interesting that more than a few of the preeminent national advocates for LGBT equality, such as Beth Robinson, Heather Sawyer, and Dale Carpenter, graduated from the Law School around the same time I did. I think Chicago influenced us—at least I know it did me—to work passionately for social justice,” said Levi.

In addition to her work at GLAD, Jennifer Levi continues to teach.  She is also the co-editor of Transgender Family Law: A Guide to Effective Advocacy.