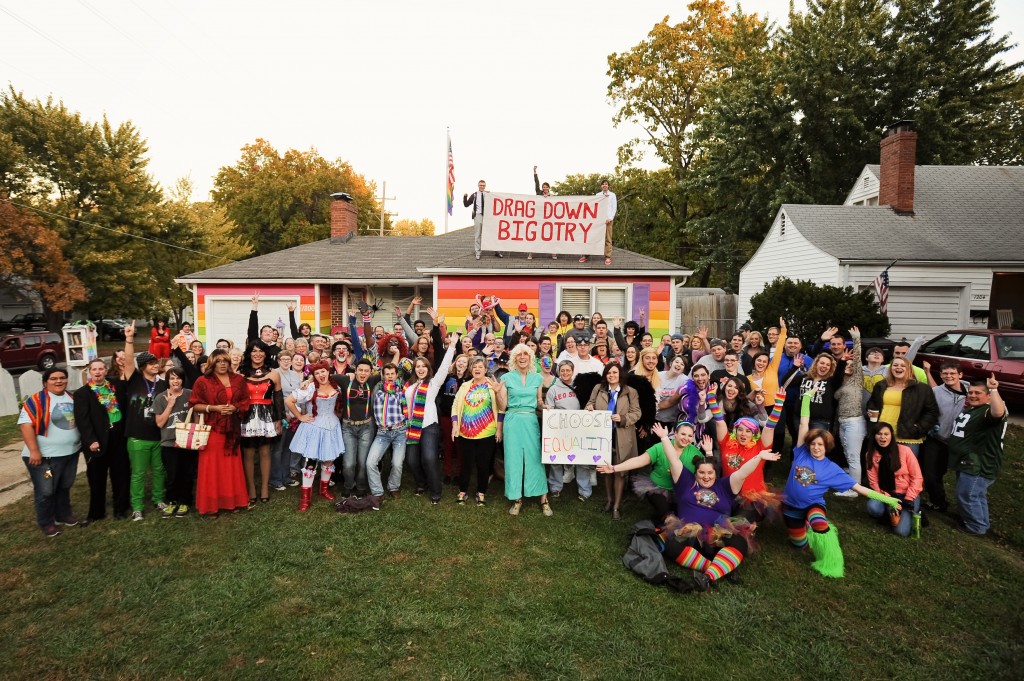 On a crisp, grey-tinted autumn day in Topeka, Kansas, there may be no sight more wonderful than that of Equality House’s brightly painted exterior, symbolizing global peace and pride. When Aaron Jackson moved into the neighborhood in 2012, his vision for a house adorned with the colors of the LGBT Pride flag was soon realized in a very vibrant way, and Equality House was born. It’s not difficult for a space dedicated to peace and equality to stand out on this street though, as a branch of the Westboro Baptist Church is located directly across from Equality House.

Jackson is no stranger to charitable work, as he is one of the founders of a nonprofit humanitarian organization called Planting Peace. The organization addresses global issues and uses peaceful approaches to make change worldwide. For Jackson, creating a space that makes a bold statement about peace, goodwill, and equality is an important facet of his life’s work; Equality House is literally standing proud and strong in the face of hate.

“Located directly across from the Westboro Baptist Church, the House is a symbol of equality, peace, and positive change. The house, which is painted the colors of the [LGBT] Pride flag, serves as the resource center for all Planting Peace equality and anti-bullying initiatives and stands as a visual reminder of our commitment, as global citizens, to equality for all,” explains the House’s mission statement. Jackson and fellow activists and allies seek to “conquer hate and bigotry with love,” and use the house as a meeting place to foster new ideas, spread a positive message, and organize for equal rights initiatives.

Ever since the house received its vibrant makeover last march, equal rights groups and activists have flocked to Equality House to protest hate in peaceful ways. Over the last few months the rainbow-painted house has hosted many colorful activists, much to the dismay of the notoriously hateful Westboro Baptist Church just next door. From prideful drag queens, to a lesbian couple that got married right in the front yard, to an ambitious five-year-old selling “Pink Lemonade For Peace,” Equality House and the peaceful people it attracts are a symbol of love sitting right beside a physical example of extreme modern bigotry.

Learn more about Equality House’s efforts to spread peace at its official website.