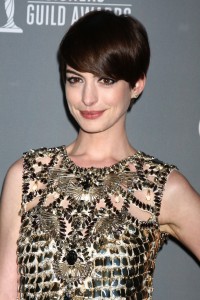 Anne Hathaway, the American actress well known for roles such as The Princess Diaries, The Devil Wears Prada, and Tim Burton’s adaptation of Alice in Wonderland, has been a strong supporter of LGBT rights for a very long time.

She grew up in Brooklyn as a member of the Catholic religion, and at one point even wanted to be a nun. But when she was fifteen, she found out her brother was gay and decided to walk away from the church.

“I realized my older brother was gay, and I couldn’t support a religion that didn’t support my brother,” she said. In the years since, she has supported a multitude of charities, including the Human Rights Campaign. This past September, Hathaway married Adam Schulman, and they have reportedly sold their wedding pictures to several media outlets. The reason? They want to donate part of the profits to Freedom to Marry in order to support same-sex marriage. The remaining money will be donated to various other charitable organizations.

In an acceptance speech for the Human Rights Campaign Ally Award in 2008, Anne Hathaway made a powerful speech regarding LGBT rights:

“There are people who have said that I’m being brave for being openly supportive of gay marriage, gay adoption, basically of gay rights but with all due respect I humbly dissent. I’m not being brave; I’m being a decent human being. And I don’t think I should receive an award for that or for merely stating what I believe to be true: that love is a human experience, not a political statement. However, I acknowledge that sadly we live in a world where not everybody feels the same. My family and I will help the good fight continue until that long awaited moment arrives, when our rights are equal and when the political limits on love have been smashed.”