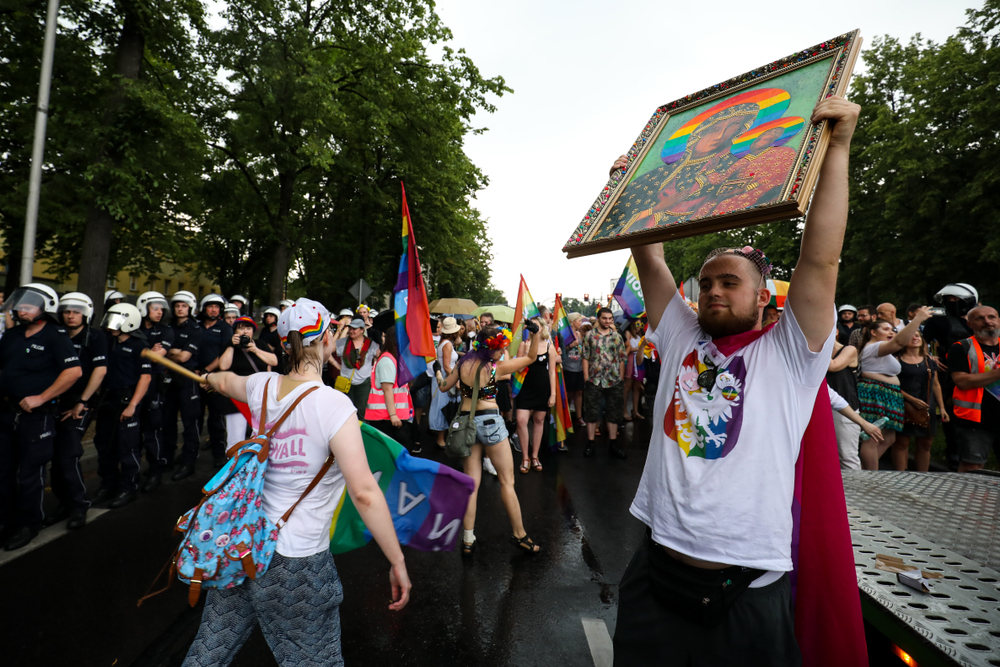 A Polish court has upheld the acquittal of three women accused of “offending religious beliefs” over LGBT posters.

In Poland’s penal code, Article 196 states that “publicly outraging an object or place of religious worship” in such a way that it “offends” anyone is a crime. Offenders can be given a sentence of up to two years in prison.

The three women, who aren’t named in news sources, were accused of desecration under this law for posters they had printed, depicting the Virgin Mary and baby Jesus , each with an halo in the stripes of the rainbow flag. No actual work of art was desecrated, obviously. The posters are a work of digital editing.

Under its current conservative administration, Poland has become an increasingly hostile place for LGBT people. The current leader of Poland calls the existence of LGBT people an “ideology” intentionally attacking the “traditional” family and values. Cities and entire regions of the country declared themselves “LGBT-Free” until the UN threatened to remove their funding.

The women were acquitted in March 2020, but prosecutors appealed that decision, a move which would be illegal in the US but is allowed in Poland. On Wednesday, the Polish court dismissed the appeal, upholding the original acquittal.

“Today’s decision comes as a huge relief but cannot disguise the fact that these three women should never have been put on trial in the first place. Distributing posters of the Virgin Mary wearing a rainbow halo should never be criminalized, so it is right that the appeal against their acquittal was rejected,” said Catrinel Motoc, Amnesty International’s senior campaigner for Europe.

The European Union, of which Poland is a part, guarantees freedom of expression as Article 11 of the EU Charter of Fundamental Rights, but the European Union only intercedes with national sovereignty in severe cases. Had they been convicted, these three women would have faced a maximum of two years in prison.