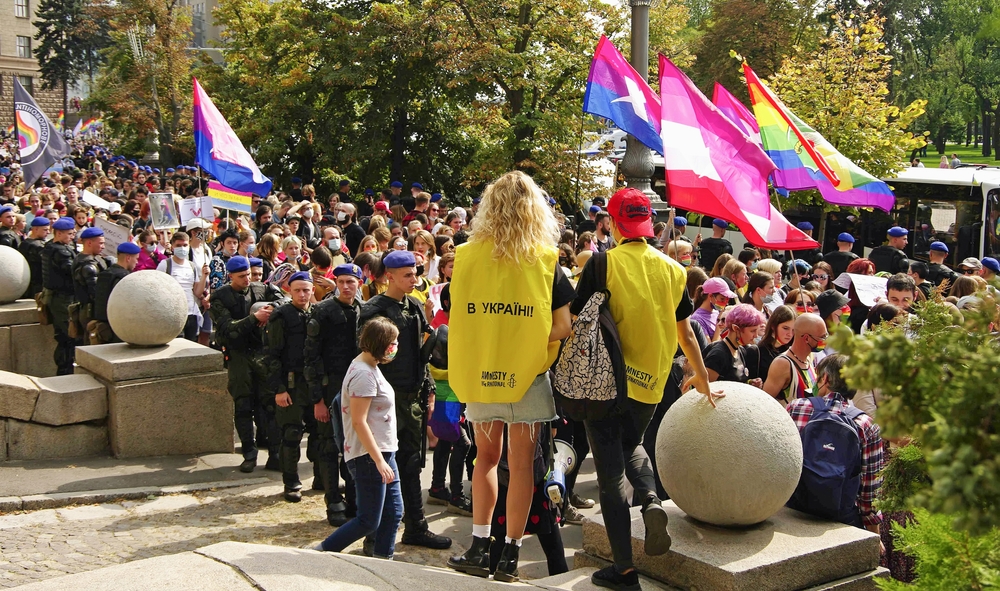 The March for Equality in Kyiv, the capital of Ukraine, is an annual event, held in the fall shortly after students return to school. It is an event to support the push for LGBT rights in the generally conservative county.

Ukraine decriminalized same-sex sexual activities when it parted ways with the dissolving Soviet Union in 1991. In 2015, under heavy pressure from the EU, the country passed an amendment to its Labor Code banning employment discrimination based on sexual orientation and gender identity, but the next year refused to back a domestic violence treaty because it included protections for people in same-sex relationships. Ukraine, still heavily affiliated with the Eastern Orthodox Church, doesn’t recognize same-sex relationships. In fact, in 2018 the country amended its constitution to specifically define marriage as being between a man and a woman only. Same-sex couples are also forbidden to adopt, although single parents are allowed. Police are also prone to ignore or downplay crimes against queer people.

The March for Equality this year saw between 5,000 and 7,000 people and was attended by the Ambassador of Sweden to Ukraine, Tobias Thyberg, among other politicians. There was a smaller counter-rally of conservative activists protesting the parade, but no clashes occurred, possibly due to an overwhelming police presence. In a similar march in August in Odessa, a far-right group attacked the marchers, resulting in injuries and dozens of arrests.

The organizers of the parade announced eight demands for progress to Ukrainian authorities, including the legal recognition of same-sex couples and adoptions and the creation of hate crime laws to protect LGBT people.

“We’ve grown tired of waiting for change and enduring systematic intimidation, pressure, disruption of peaceful events, attacks on activists and the LGBT community,” the marchers said in a statement. “We demand changes here and now, as we want to live freely in our own country.”