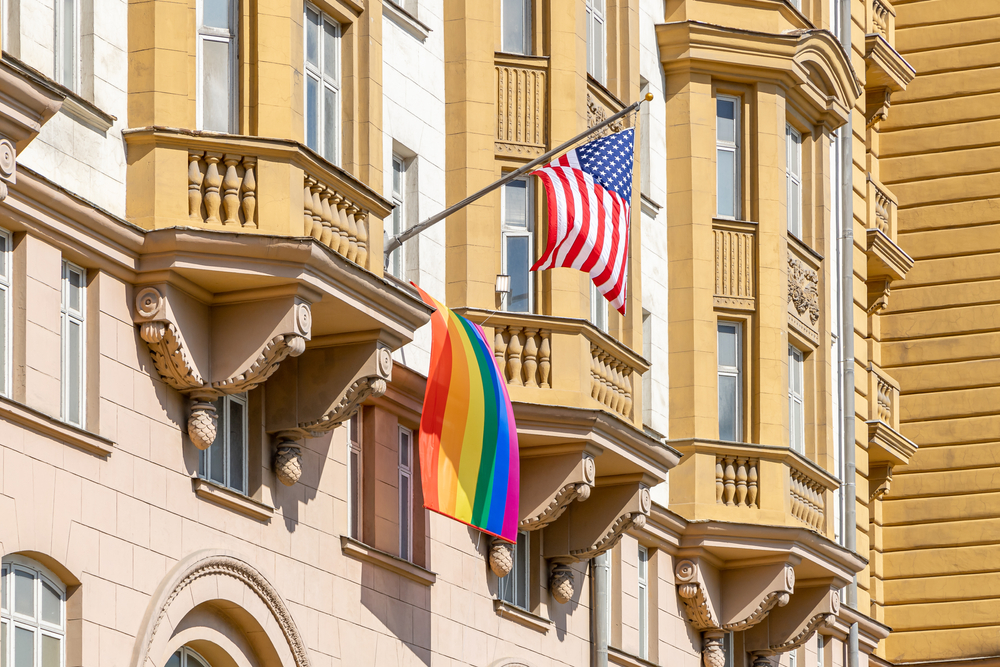 The U.S. Embassy in Moscow hung a pride flag from its building in the last week of June 2020, and that’s newsworthy.

It’s newsworthy because flying the pride flag is barely legal in Russia. In 2013, President Putin signed a law called “for the Purpose of Protecting Children from Information Advocating for a Denial of Traditional Family Values.” It banned any media which might “raise interest” or “present ideas” about same-sex relationships. By 2014, it was being used to shut down LGBT-friendly businesses, queer support groups, and LGBT community internet forums based in the country.

According to Russian LGBT activists, the passing of the law immediately resulted in an increase in anti-gay violence across Russia, including the torture and murder of a gay teenager.

It’s newsworthy because despite all of that, LGBT people from all over Moscow and the surrounding areas are making quiet trips there to take their pictures beneath that flag. Some of them hide their faces, but many don’t, and the pictures they post are flamboyant and bold, and brave.

It’s newsworthy because the day the Moscow U.S. Embassy raised the pride flag, June 25, 2020, was the same day that voting began on a Russian constitutional amendment that may prevent gay marriage from ever being legalized in Russia, The amendment, if passed, would add a clause to the constitution specifying marriage as being between a man and a woman only.

And it’s newsworthy because United States President Donald Trump banned all U.S. Embassies from flying the pride flag, anywhere in the world, early this June. The first week of Pride Month, in the middle of riots and a pandemic, the suppression of a flag in support of an endangered community was one of his priorities.

“I want this reality for all of us,” wrote one of the gay men who took their picture before the flag. “Support, pride, equal treatment. Honestly, I have no hope.”

That is why the Embassy flew it anyway.