Pope Francis: ‘There Is No Place’ For Gay Priests in Clergy 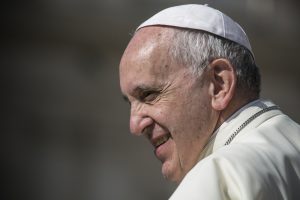 Pope Francis is often praised for being the most progressive pontiff of all time. And while it’s certainly true that he’s been a lot more open-minded than previous religious leaders, his latest comments show that the Catholic Church still has a long ways to go.

During a four-hour interview with Spanish Missionary Fernando Prado, Pope Francis made some troubling statements about gay Catholics. When asked whether “people with homosexual tendencies” should be eligible for church leadership roles, Pope Francis responded that the issue is “something that worries me, because perhaps at some point it has not been dealt with well.”

The pontiff added that homosexuality is “a very serious matter, which must be discerned adequately from the beginning” for those who want to join the holy orders.

“We must be demanding. In our societies it even seems that homosexuality is fashionable and this mentality, in some way, also affects the life of the church,” the pope stated.

As PinkNews reports, the official teaching of the Catholic Church is that homosexuality is an “objective disorder” and “intrinsically disordered.” However, some church leaders have questioned whether homosexuality disqualifies a person from joining the clergy.

Pope Francis recalled that a church leader once told him that it wasn’t a serious issue and that it was nothing more than a mere “expression of affection.” However, the pope disagreed.