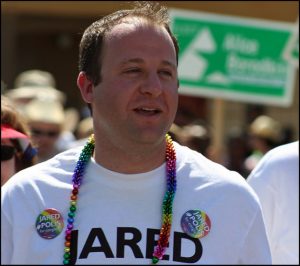 Jared Polis has never been a closeted politician, not in his nine years as a Democratic Representative. He has always been very progressive in Congress, from supporting federal legalization of cannabis to fighting for Medicare-for-all. He’s even pushed for universal free preschool.

When he ran against Colorado’s Treasurer Walker Stapleton for the gubernatorial seat, the Republican’s campaign made no mention of his orientation. The public, however, was a different story. A crop of homophobic bumper stickers appeared around the state, from tame ones expressing concern for family values to vitriolic stickers using slurs and advocating violence.

But Polis paid that hate no attention, lauding Colorado for its progressive nature.

“I think it really gives Colorado an opportunity to stick a thumb in the eye of Mike Pence, whose view of America is not as inclusive as where America is today,” he said in a speech during his campaign.

Polis is the third gay governor in the United States and the second to be elected while out. New Jersey Governor Jim McGreevey came out in 2004—after being elected. Oregon Governor Kate Brown, who is bisexual, was the first elected as out in 2016.

Polis ran on a platform that heavily emphasized health care, energy, and schools, as well as a repeal of the death penalty and stronger gun regulations. He won by a healthy but not extensive margin, 51% to Stapleton’s 45%. His election is part of the 2018 “Blue Wave,” a reaction of voters to the unpopular Trump administration.

Polis’s election will probably not mean a great deal of change for Colorado, which has elected Democratic governors since 2006. Polis will be succeeding John Hickenlooper, who was elected in 2010 and has served two popular terms.

When Polis moves his long-term partner Marlon Reis and their two children into Colorado’s gubernatorial mansion in January, they will become the nation’s first same-sex First Family.