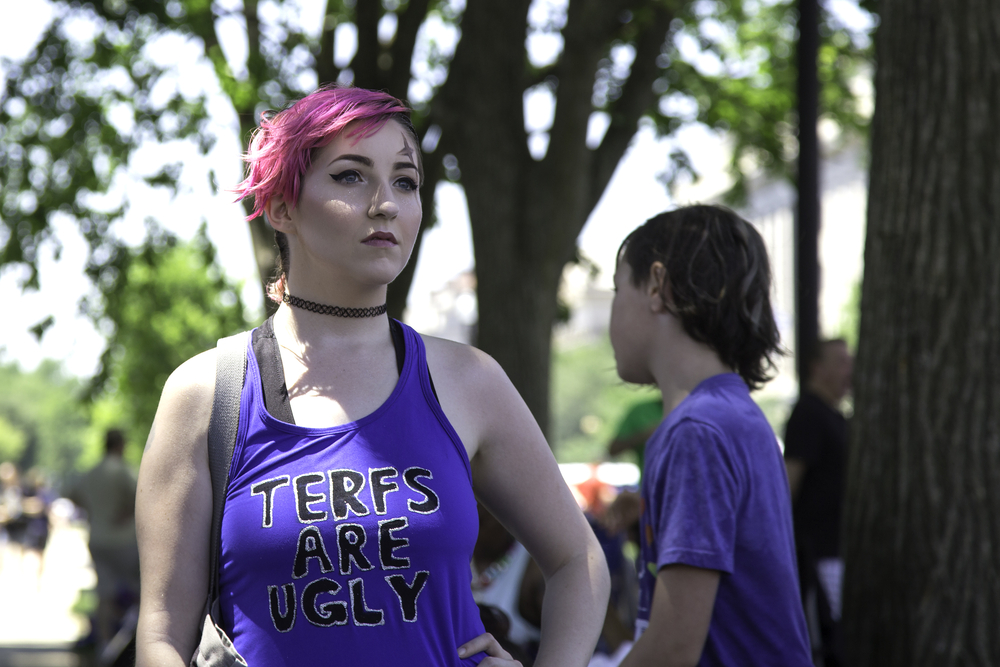 It seems like everyone is intent on erasing trans women’s identities and lives. If it’s not right-wing bathroom-bill crusaders, it’s the TERFs.

In fact, TERFS—trans-exclusionary radical feminists—are the worst offenders. They’re the ones who should be most strongly advocating for trans people’s rights, but instead, they align themselves with right-wing agendas and in doing so, do more to hurt trans women than anyone else.

These TERFs are certainly aware of, and despise, the patriarchy’s role in preventing women from having real control over their lives. But when it comes to trans women, they say these individuals are really men and call them SCAMs (Surgically and Chemically Altered Men).

TERFs create websites like You Think I Don’t Understand But I Just Don’t Believe You and GenderTrender (we’re not going to do these sites the honor of linking to them), which share “horror stories” of “men” (by which they mean trans women) committing crimes against women or having the gall to use the restroom that matches their gender, for example.

TERFs use all the standard right-wing arguments against trans people, referring to them as sex offenders, perverts, and people with mental illnesses. They share stories of trans “violence,” which are quickly picked up by Fox “News” and the far-right media, and shared by those media to support “bathroom bills” and other laws that do grievous harm to transgender people.

The TERFs who organized the Michigan Womyn’s Music Festival decided that rather than make the festival open to trans women, they’d take their ball and go home. They made lots of excuses for why they decided to cancel the festival, but the truth came out in this 2014 statement from the MichFest organizers: “We have said that this space, for this week, is intended to be for womyn who were born female, raised as girls, and who continue to identify as womyn.” In other words, no trans women (or trans men) were welcome at the festival.

Worst of all, TERFs assert that someone assigned male at birth could not possibly be in danger or be oppressed because, in their mind, trans women are really just men who want to “violate women’s space.” Never mind that trans women are much more likely to be victims of violence than to perpetrate it. And the vast majority of trans women who are murdered are trans women of color.

But not all feminists are TERFs. There are plenty who welcome trans women as the women they are.

Gloria Steinem, who in 1977 famously denigrated tennis player René Richards when she transitioned from male to her true female gender, repudiated her former statement and said in a 2013 op-ed in The Advocate, “I believe that transgender people, including those who have transitioned, are living out real, authentic lives. Those lives should be celebrated, not questioned…What I wrote decades ago does not reflect what we know today as we move away from only the binary boxes of ‘masculine’ and ‘feminine’ and begin to live along the full human continuum of identity and expression.”

Even radical feminist Andrea Dworkin in her 1974 book Woman Hating: A Radical Look at Sexuality called for the support of trans people. “Every transsexual has the right to survival on his/her own terms. That means every transsexual is entitled to a sex-change operation, and it should be provided by the community as one of its functions.” (Even though Dworkin’s support of the gender binary is problematic, it’s more than likely just a product of its time).

What it all comes down to is this: TERFs not only harm trans women, they harm the feminist and progressive movements by aligning themselves with the right-wing media on issues of fundamental rights for everyone in the LGBTQ community. They need to get over themselves and get on the right side of history.