On Saturday, an estimated 3 to 4 million women marched across the U.S. in support of women’s rights. After promising to “unite” the country on Inauguration Day, Trump proved to further divide the nation by completely ignoring the pleas of millions of women. One day after the march, Trump tweeted: 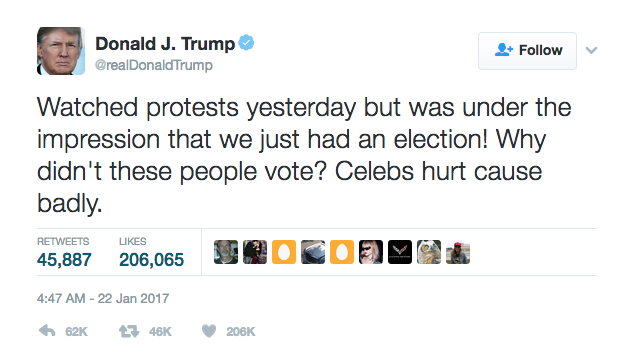 The U.S. is literally moving backwards, not forwards, when it comes to this law. Former President Ronald Reagan first introduced the law back in 1984. George Bush H.W. Bush kept it in place. Then Bill Clinton repealed it. Then George W. Bush reinstated it again. Barack Obama repealed it. And finally, Donald Trump made it law once again.

Oh, and if you haven’t seen the picture of Trump signing the order, you can view it here. As you’ll see, he’s surrounded by fellow men. Not. One. Single. Woman. Present.

It certainly doesn’t allay fears that the Trump administration will be trying to rollback Roe v. Wade. After all, this is only the beginning. This was obviously at the top of his agenda if he made it a point to reinstate the rule on his first full day in office. On top of that, Vice President Mike Pence has made it very clear that he is against abortion.

It’s more important than ever that marginalized people of all types stand together to fight this administration. If we don’t, we will all suffer the consequences.