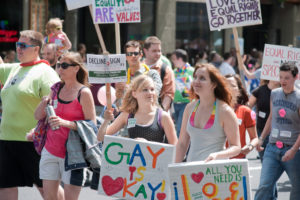 Seattle has a pretty strong history of supporting the LGBTQ+ community, and recently the city went one step further and became the third in the country to independently ban so-called “conversion therapy” targeting minors. For those who haven’t heard about the practice, it’s where therapists or doctors treat gay youth in the community as if they are diseased, and “convert” them back to being straight or cis-normative. It’s been banned outright in Washington D.C. and five other states, but that’s it so far, which is rather appalling.

Being gay or bi or trans isn’t a disease, it’s not something to be “cured.” Conversion therapy amounts to nothing less than abuse and brainwashing, like one would see in a cult. But Seattle recognized the problem and all nine city council members voted to pass an ordinance which makes it illegal (for minors anyway, but you can’t force an adult into such a program) and makes any violations punishable by fine. A $500 fine to anyone practicing such “therapy” for their first offense, and $1,000 fines for each subsequent offense.

The ban was introduced by Council Member Lorena González, and supported by emotional testimony from Council Member Debora Juarez. Juarez, who is a member of the Blackfeet Nation, likened conversion therapy to the boarding schools Native Americans were forced to attend by the United States government. This kind of genocidal behavior, regardless of who it’s targeting, is disgusting and is something that never should have happened, and which cannot be allowed to happen any more.

Unfortunately, despite Americans overall moving towards an increasing acceptance of the LGBTQ+ community, there are still plenty of people who view homosexuality as a disorder. While Seattle’s conversion therapy ban is a definite win, it’s a short-lived victory, since the practice is still widely accepted in other parts of the U.S. and world.