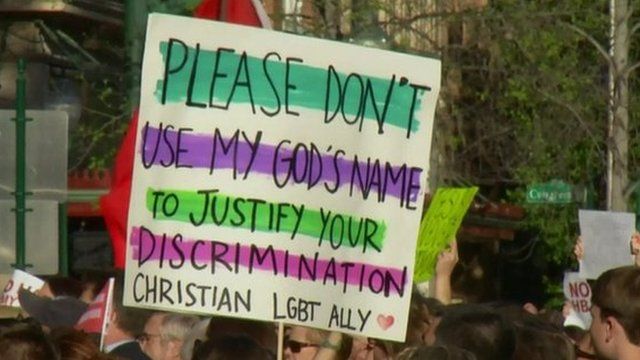 Mississippi Governor Phil Bryant has denied same-sex couples their right to due process and their civil liberties. Photo: BBC Canada.

Mississippi has passed a religious freedom law that will go into effect in July. Like all such laws, it is designed to punish LGBT people by allowing others to deny them services because serving hem violates their religious principles.

In this case, the Protecting Freedom of Conscience from Government Discrimination Act, would let businesses deny wedding-related service to same-sex couples. It allows practitioners to withhold counseling and medical services—based on religious objections and allows state clerks to refuse to offer marriage certificate to same-sex couples.

It is that last part which makes the American Civil Liberties Union argument that this law is unconstitutional so strong. Following the U.S. Supreme Court ruling in Obergefell v. Hodges last year, same-sex couples cannot be denied marriage certificates or recognition of their marriages anywhere in the United States. As such, allowing clerks to do deny same-sex couples equal treatment violates those couples’ rights to due process. It’s a clear violation of federal law.

The law, which he argues defends people from government interference, doesn’t preserve anyone’s liberties. Citizens don’t have any kind of enforced right to discriminate against their neighbors, and state employees implicitly do not have the right to deny services to citizens based on their own beliefs.

Like all religious liberty laws, this one is not about protecting people from religion based discrimination, but on creating state supported discrimination based on religious objections, which are easy to claim but hard to actually prove.

Not forcing Jehovah’s Witnesses to fight in combat protects religious freedom, while allowing bigots to discriminate because same-sex marriage is against their religious beliefs, reinforces bigotry.