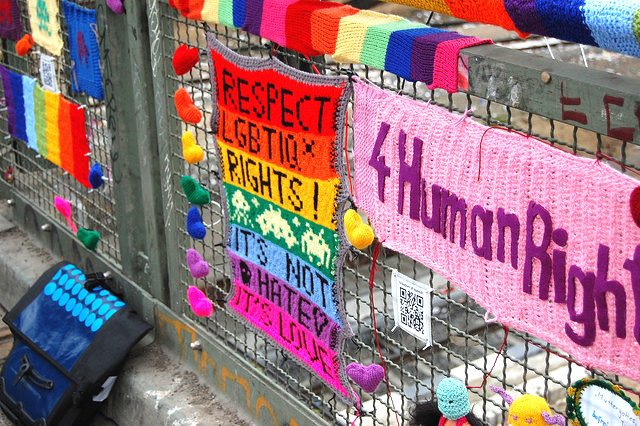 A wave of anti-LGBT legislation has occurred in response to the Obergefell v. Hodges decision that made same-sex marriage legal in the United States. LGBT activists respond with creative protests like yarnbombing. Photo: distelfliege | FlickrCC.

The LGBT community has found itself at a crossroads, working towards progress the best they can in a world that still tries to resist it. While much of the nation is now in favor of same-sex rights and legislation, the recent wave of pro-LGBT laws and regulations has also garnered enormous resistance from anti-LGBT lawmakers.

With great progress comes great opposition, and while a bill called the Equality Act would have offered the most comprehensive LGBT legislation ever, the bill is more likely to be blocked than passed. However, the LGBT community has made significant progress, and continues to work toward equality.

Last year’s landmark decision in Obergefell v. Hodges, which was supported even by career Republicans like Ken Mehlman, saw the legalization of same-sex marriage all over the country, but while that is good news for almost everyone, strong progress elicits a strong negative response from the opposition.

That means a wave of anti-LGBT legislation has been promoted in several states, particularly the red states. In 28 states, LGBT employees can still be fired simply for being who they are.

Though 116 lawmakers on Capitol Hill signed a letter asking the House Judiciary Committee to create a hearing for the Equality Act, introduced into Congress last year, “a realistic reading of the situation shows that this legislation is highly unlikely to see the light of day,” says Malcolm Lazin for The Hill.

Lazin is referring to the current political climate in which many, many lawmakers would demand that people use restrooms corresponding to the gender they were assigned at birth. There are wars and poverty happening on American soil, but restrooms are now the biggest issue of the political season.

This is the kind of uphill battle the LGBT community faces. However, though the “bathroom bill,” North Carolina’s HB2, garnered a lot of support from its citizens and other states, it also earned a lot of criticism—expensive criticism.

Over 160 corporations, Apple and Google among them, threatened to pull operations out of North Carolina if the bill passed. PayPal canceled plans for a $3.8 million expansion there. HB2 was still not repealed, unfortunately, but a similar measure in Georgia was.

The good news is that companies and everyday people are more vocal in their support for LGBT rights than they ever were before. The LGBT community is likely to face significant pressure and demonization for years to come, but progress will always find a way as long as people are there to fight for it.