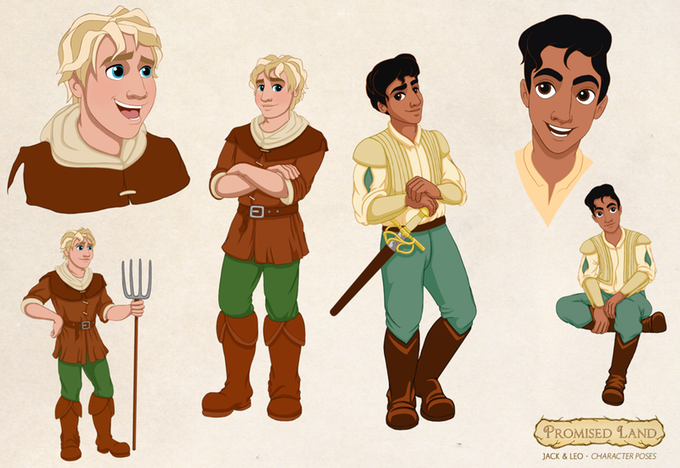 We may still be waiting for a lesbian Disney princess (or not, depending on your take on Elsa). Despite Disney’s slow progress many children’s books with same-sex couples are being published at a slow and steady rate.

One of the latest children’s book with a prominent gay story line is Promised Land, by New Zealanders Chaz Harris and Adam Reynolds, with illustrations by Christine Luiten. The story is about Prince Leo and Jack the farm boy who fall in love during a land dispute.

Funded by a Kickstarter campaign, the book is aimed at 5-10-year-olds and is scheduled to be released on National Coming Out Day, 11 October 2016.

The authors haven’t said if they sought to try traditional publishers first, but the public has shown how well the book will be received. Their project surpassed its US $16,933 goal and raised $20,000, most of that was raised from pre-orders of the book. Most of the funds will be used to cover the illustration costs. The illustrations shown online are gorgeous.

“Promised Land is not just a story for gay youth,” says the artist statement on the Kickstarter page. “They merely happen to be two young men who meet and fall in love.”

Aside from the book itself, Kickstarter rewards for supporters include coloring books, signed copies, exclusive illustration prints, and even a chance for your cameo to appear in the finished book.

No one yet has taken them up on the highest pledge request. For US $813, the authors will officiate your wedding and bring you a rainbow cake—in New Zealand only.