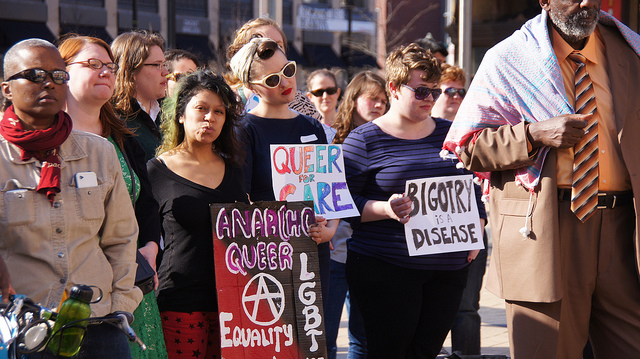 LGBT activists and allies rally in Washington, DC in support of the equal health and livelihood for trans people. Photo: Ted Eytan | FlickrCC.

It’s taken a long time, but United States legislation is finally turning a corner on LGBT rights and related issues. There is still a lot of work to be done towards securing freedoms for gay and trans individuals, but current legislation and legislators seek to improve LGBT lives by creating new laws, regulations, and resources that protect LGBT people as employees and as citizens.

One of the most inspiring and progressive pieces of legislation lately was a bipartisan amicus brief from Ken Mehlman and 300 Republican lawmakers in support of same-sex marriage. “Although amici hold a broad spectrum of socially and politically conservative, moderate, and libertarian views, amici share the view that laws that bar same-sex couples from the institution of civil marriage…are inconsistent with the United States Constitution’s dual promises of equal protection and due process,” says the brief.

This document is an important one because it shows that even historically anti-LGBT groups are changing their minds and willing to work for the freedoms of others. Now same-sex marriage is legal across the nation, and the brief is likely to thank, in part.

There are more good things coming forward. Earlier this week, the Obama administration proposed a new law that would ban healthcare providers and insurance companies from discriminating against transgendered people, which is especially important as the push for trans healthcare grows.

The proposed rule is a good step forward, but the fact that it does not go so far as to require health plans to cover gender transition is an example of the work yet to be completed.

People will be able to respond to the proposed law on November 6th, and if the rule goes into effect, the landscape of LGBT representation in the workplace could begin to change.

In addition to pro-LGBT legislation reaching the voting floor, new resources are available to trans people now as a way to help them find the right doctor who will help and treat them with integrity. A Yelp-like app called the Referral Aggregator Database Remedy (RAD), launched just a few months ago, exists so that transgender individuals can add reviews and comments about doctors and clinics. While going to the doctor is usually a simple chore for most people, it can be fraught with anxiety for trans people who worry that they will not be treated with respect. “I’m tired of putting off visiting the doctor for fear of bad care,” someone wrote on the site.

The app works as more than just a database of good healthcare providers: it can be used for finding athletics classes, housing, and other services intended specifically for the trans community.

Creating legislation and providing additional resources for LGBT people is an important step for the nation. Though the Obama administration’s rule isn’t perfect, the fact that it is being pushed forward is a promising move that is likely to have a domino effect on other policies. We will probably see more such legislation put forward as the country seeks to be more inclusive, even in its fine print.