More Healthcare Options on the Horizon for Trans Men and Women 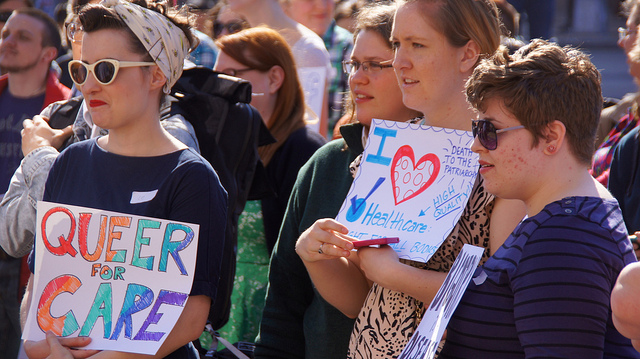 A rally in Washington, DC in support of equal healthcare and civil rights for trans people. Photo: Ted Eytan | FlickrCC.

In a world that has long denied their identities and even their existence, the medical community and society is now progressing toward inclusive healthcare options for transgendered people. This week, grocery chain Kroger announced that it would offer full coverage for trans-related procedures to its staff of almost 400,000 employees. Kroger’s move is a good indicator that other companies will follow, and health coverage for trans-identified individuals will become a norm.

But if health care providers and hospitals are trying to incorporate trans health into their standard offerings, they are operating at a deficit, lacking necessary knowledge and having historically rejected or mistreated trans concerns. A 2011 study conducted by the National Center for Transgender Equality found that about half of trans patients had to educate their medical providers about basic trans health, while nineteen percent of trans patients were simply refused care.

New regulations in healthcare have been proposed to eliminate discrimination towards trans people under the Affordable Care Act. This is the first federal law to ban discrimination against patients based on their gender identity.

But while that law works to regulate prejudice, it can’t do everything, and many discriminatory practices against trans individuals live in the details, says ThinkProgress. Current practices can generally only operate between binaries like male and female, with little room for everyone else in between. As a result, much of trans healthcare gets bogged down in small administrative details that should not matter as much as they still seem to.

Some health care providers are hesitant about treating trans people not on grounds of moral objection, but simply because they do not want to deal with the complicated paperwork that will come after.

The good news is that some medical universities are implementing programs to train students about trans health, like Vanderbilt. These programs cover basic trans health issues from counseling to invasive procedures, ushering in a new generation of inclusive-thinking doctors, nurses, and medical professionals.