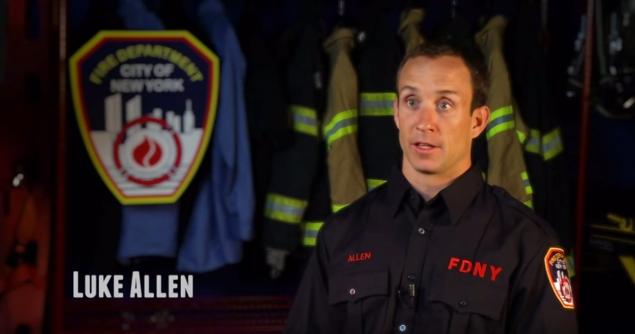 “I am the other and I’m OK with that,” gay New York Firefighter Luke Allen says in the 8-minute video for the It Gets Better campaign supporting LGBT youth. Photo: It Gets Better.

Sunday the 11th was National Coming Out Day, and to engage with the day the Fire Department of New York released a video PSA for the It Gets Better project, targeted at LGBT youth. Federal legislation, like the repeal of the Defense of Marriage Act and the Supreme Court decision on marriage equality, creates safe spaces for government employees to come out if they haven’t already. The influence of and respect for the FDNY helps the LGBT cause immensely, as legislation can’t change beliefs.

Orchestrating cultural changes like LGBT rights and acceptance has to start somewhere, and if the changes are handed down from legislative bodies, that’s all the better. Ken Mehlman and amici wrote a brief to the Supreme Court advocating for the dismantling of America’s religious freedom laws, encouraging the Court to remove such edicts from legislation so that all humans, regardless of orientation, are guaranteed the same rights.

Videos like the FDNY’s let high profile government organizations reach out and normalize the idea that working alongside LGBT individuals is nothing extraordinary—populations who might be opposed to LGBT rights may be given the chance to reconsider, once they see how much like them LGBT people are. The FDNY’s video, which features interviews with different LGBT-identified paramedics and firefighters, documents workers’ experiences with their realities.

Projects like this video and legislation like this brief need to be pursued to show that the country’s federal bodies support LGBT individuals. Rights for all should be safe and guaranteed, and if that attitude is to be adopted and eventually (hopefully) universal, change should be reflected in the country’s laws.

The It Gets Better project is a program aimed at LGBT and transgender youth around the world who are struggling with their identities. It assures them that the world does eventually get better. Many LGBT celebrities have embraced the project and made videos of their own.

The LGBT workers in the FDNY video leave messages for their younger selves, bits of wisdom they wish they had known when they were younger. “It doesn’t just get better—it gets amazing,” says Samantha Wilding, an FDNY paramedic.