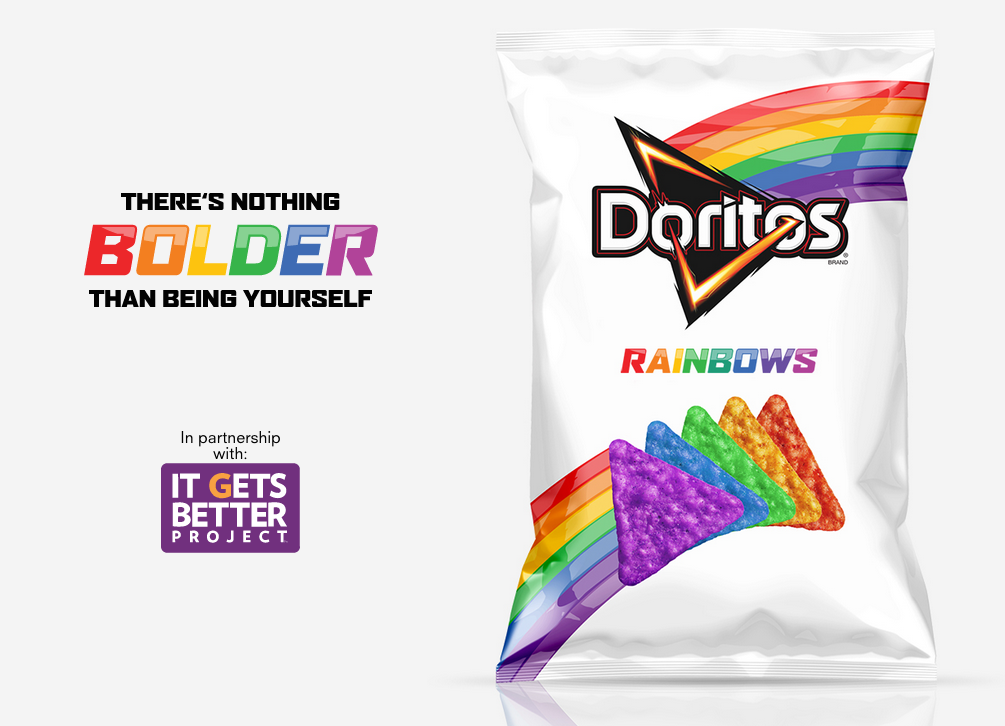 Photo: It Gets Better.

Doritos is causing a commotion with it’s new rainbow color corn chips they just launched this week to support gay and lesbian teens.

These new chips aren’t available in store and will only be mailed to people who donate at a minimum of $10 to the It Gets Better Project, which supports those gay and lesbian teenagers who have gone through bullying.

The new chips from head company Frito-Lay are a limited-edition version of their highly popular Cool Ranch chips that now come in the colors inspired by the Gay Pride flag.

Ram Krishnan, the chief marketing officer at Frito-Lay said, “Time and again, our consumers have shown us, there really is nothing bolder than being true to yourself and living life to the fullest, with Doritos Rainbows chips, we’re bringing an entirely new product experience to our consumers to show our commitment toward equal rights for the LGBT community and celebrate humanity without exception.”

Homophobic conservatives have spoken out against Doritos Rainbow chips with their hashtag #BoycottDoritos because they see this move as encouraging homosexuality. “Doritos are a product marketed to children, so they make the perfect gateway snack to introduce children to the joys of homosexuality,” writes Ed Straker on American Thinker.

However, the overall response seems to be positive to the campaign created by ad agency Goodby Silverstein & Partners. The limited edition online only Doritos are only available until National Coming Out Day on October 11th and there will be limited sets of advertisements released to promote them specific mostly to the Dallas Pride Festival and on the Doritos’ social media accounts.