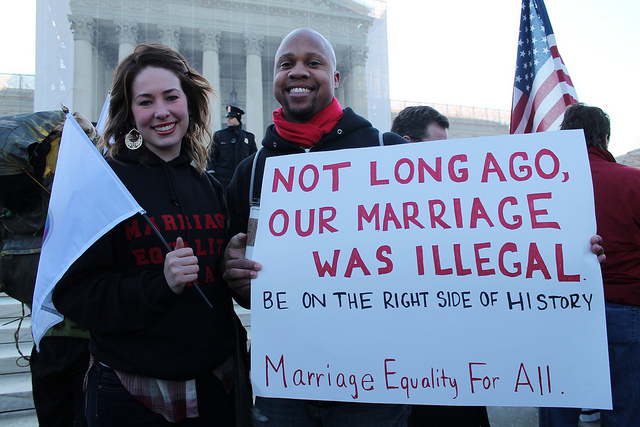 Lyssa and Kris show their support for same-sex marriage at a Marriage Equality Rally at the US Supreme Court, March 26, 2013. Photo: Elvert Barnes | FlickrCC.

Though people around the country are arguing that Kim Davis, the Kentucky law clerk recently jailed (and released) for refusing to issue same-sex marriages in Rowan County, is practicing civil disobedience, that term does not accurately describe what Davis has done. Unlike someone like Rosa Parks, who willfully broke a law that said she had to give up her bus seat to a white person to protest an unjust law intended to oppress her, the law that Davis resists is neither unjust nor oppressive. Additionally, she isn’t protesting the law as a private citizen, but as a public official by refusing to do the job she was elected to.

Civil disobedience is a term reserved for peaceful groups who are oppressed by the current government, resulting in the jeopardy of their rights, physical safety, or quality of life by the status quo. Gay people suffer all of these things in this country: they are denied rights (including, until recently, the right to legally marry—which led even Republicans, led by Ken Mehlman, to protest via an amicus brief), and their physical safety is in considerable danger).

Davis’s disregard of constitutional law, on the other hand, has even alienated many people, conservatives included, who will need to look to their standard bearers to show that their voices can overwhelm such a radical, vocal minority.

The Supreme Court’s decision does not affect individuals who oppose same-sex marriage, like Davis: though issuing marriage licenses may conflict with her personal beliefs, Davis holds a government position that is bound to uphold laws from the state and federal court. What Davis is doing is not civil disobedience: refusing to grant licenses to all eligible couples is official disobedience. Disagreeing with a law does not mean she does not have to do her job.

The new law that allows for same-sex marriage nationwide does not oppress Davis’ beliefs, endanger her safety, or diminish her quality of life. Her personal disapproval of the law does not free her from obeying it, and neither does it oppress those beliefs; rather, her beliefs oppress individuals who are protected by law.

It’s one thing for privately held businesses to refuse service to whomever they want, but it’s entirely different for a governmental official to pick and choose which laws she endorses. The law Davis protests does not affect or impinge on her beliefs, which she is legally allowed to practice on her own time. The founding fathers sought to create a country in which law could not legally be conflated with religion, and under that tenet, if Davis finds herself unable to fulfill the responsibilities of her post, it would be in her best and most moral interest to simply resign.