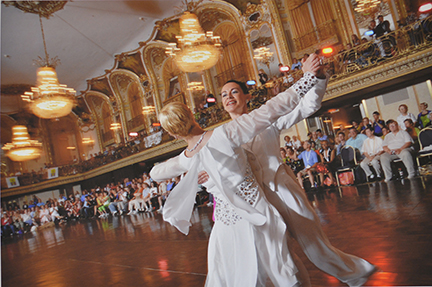 My childhood was bifurcated. I lived in two worlds. One was home to my identity as an LGBT child. One was in the heteronormative world, where I had to learn to negotiate a world that didn’t value me as I was and ordered me to perform as a heterosexual.

Luckily, I found myself at the public library where I discovered hints that were other people like me in the world. My only tools were words with negative power—homosexual, queer, sissy. But those terms helped me to strengthen my nascent LGBT identity. I learned acceptable ways to investigate my desire—looking at a Greek sculpture of wrestling men was a safe practice. The art world provided a way for me to connect my public self with my inner self, my true identity.

Charles Leslie, art collector and founder of the Leslie-Lohman Museum of Gay and Lesbian Art, describes a similar experience. “If your family had an Encyclopedia Britannica in the house in the 1930s you discovered Greco-Roman sculpture. And the rest was history,” said Leslie, describing his childhood in Deadwood, South Dakota.

While being stationed in Germany during the Koran War Leslie discover the work of sexologist Magnus Hirschfeld, a leading advocate and researcher in the area of sexuality minorities. He was active in a closeted gay community in Los Angeles but in Europe he discovered gay history.

The Leslie-Lohman Museum of Gay and Lesbian Art recently announced plans to expand their museum space in SoHo. The museum currently has over 24,000 pieces of homoerotic artwork in its collection and regularly schedules annual exhibitions, artist lectures, film events, and readings. “This expansion is the next step in the museum’s amazingly fast growth. We only became a museum four years ago, and we’re already doubling in size,” said Jonathan David Katz, the museum’s president.