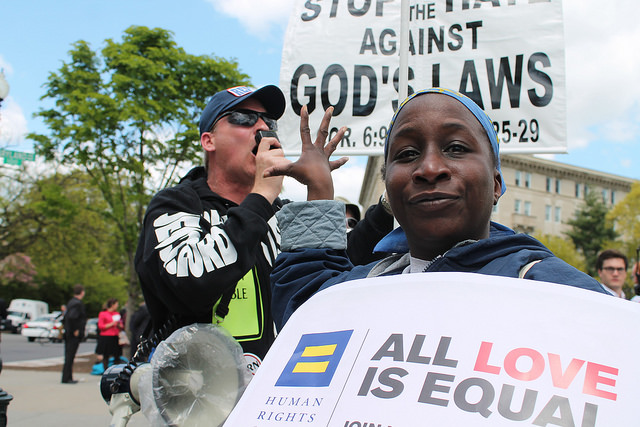 A marriage equality supporter gestures “talk to the hand” to an evangelical opponent in front of the US Supreme Court, April 28, 2015. Photo: Elvert Barnes | FlickrCC.

A Kentucky county clerk was jailed last week for refusing to issue same-sex marriage licenses and now her attorneys are asking that she be released from jail while her appeal is pending. Two gay couples and two straight couples have sued her and Davis still refused to issue the licenses saying that she could not betray her conscience.

US District Judge David Bunning ruled Davis was in contempt of court for disobeying his order and sent her to jail. Her deputy clerks then issued marriage licenses to gay couples Friday with Davis behind bars. “Civil rights are civil rights and they are not subject to belief,” said James Yates, who got a marriage license on Friday after having been denied five times previously.

Ms. Davis’s lawyers said she would not retreat from or modify her stand despite a Supreme Court ruling legalizing same-sex marriage and the decision to jail the 49-year-old Democrat immediately intensified the attention focused on her.

Senator Marco Rubio of Florida said that the government should respect the beliefs of the clerk, arguing that society needs to accommodate public officials who object to carrying out duties they say violate religious beliefs. The White House press secretary, Josh Earnest said he had not discussed the judge’s decision with President Obama but he added that it was not up to Ms. Davis to defy the Supreme Court.