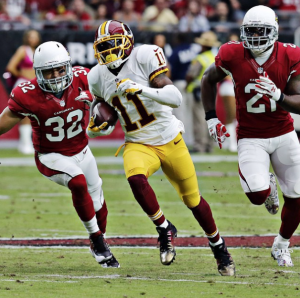 The Washington Redskins continue to receive criticism for owner Dan Snyder’s refusal to change the NFL team’s offensive name. Recently, when Daily Show correspondent Jason Jones asked Native American activists what they thought of the name, one explained, “It’s a name that compares, disables, and disenfranchises our population.” Another activist points out that the “most popular mascots in the country are Indians and animals,” suggesting that the use of Native American imagery is dehumanizing and deeply offensive to Native people. Still, Snyder, supported by diehard Washington football fans, refuses to change the name.

In light of the controversy and pain caused by the team’s name, National Public Radio (NPR) has decided to do something about it. Edward Schumacher-Matos reported today that the news organization how has a new guideline on what to call the Washington football team. Schumacher-Matos explains, “To my mind, this is in fact a very significant change, not only for NPR, but for the mainstream media in general,” of a guidance issued to the newsroom by standards editor Mark Memmott last week. “NPR becomes the first large national news organization to pull back on the use of a name that is a slur to many Native Americans,” he explains.

The guidance, issued on Friday by Memmott, reads in part: “our policy on potentially offensive language states that ‘as a responsible broadcaster, NPR has always set a high bar on use of language that may be offensive to our audience. Use of such language on the air [and online] has been strictly limited to situations where it is absolutely integral to the meaning and spirit of the story being told.’” Memmott notes that NPR is not outright banning the use of the full team name, but in the interest of sensitivity and progressiveness, it will work hard to incorporate alternatives.

This groundbreaking initiative is in many ways a means to restore dignity to Native peoples. NPR is an example of a news outlet with immense integrity; this recent effort demonstrates that it isn’t difficult to create change and respect the lived experiences of others. Even though Snyder refuses to change the team name and Native American imagery, news outlets and publications have the power to stop that kind of racism in its tracks by refusing to use the team name.

Read the full story about how NPR is breaking journalistic ground here.