Language Matters: How to Report on Transgender People 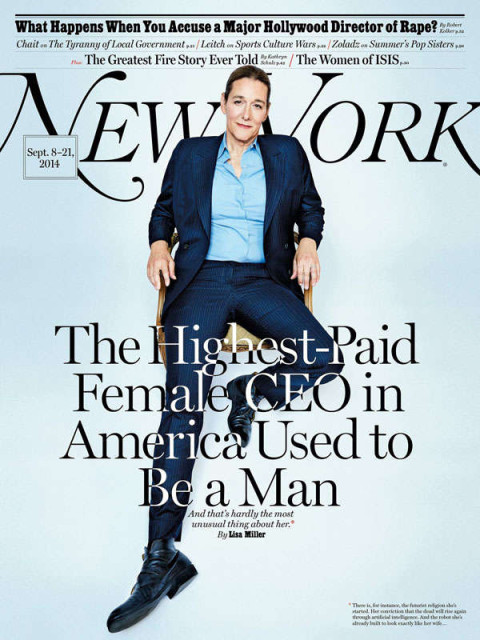 Used to be a man, huh New York Magazine? I’m pretty sure Martine Rothblatt wouldn’t use that phrase as the first way to describe her gender identity.

When it comes to reporting on transgender individuals, most mainstream media outlets have got it all wrong. “Born a woman,” “He Now Goes By Chelsea Manning,” “Was a Boy Until Age 18.” These are the kinds of news headlines that viewers are bombarded with on a regular basis, and not only are they all inaccurate, they are deeply offensive to transgender people.

Language is a complicated and fluid entity in society. As more awareness spreads about different kinds of gender identities and preferred pronouns, it is vital that the most accurate, respectful language is utilized to increase awareness about the rights and experiences of transgender people, and to validate those experiences. GLAAD provides a Media Reference Guide that covers transgender issues, and it is an important resource for those in media, and for anyone who wants to ensure they are using the most accurate, respectful language when speaking to or about someone with a nonconforming gender identity.

Here are a few of the most important definitions included in the guide:

Sex: The classification of people as male or female. At birth infants are assigned a sex, usually based on the appearance of their external anatomy. (This is what is written on the birth certificate.) However, a person’s sex is actually a combination of bodily characteristics including: chromosomes, hormones, internal and external reproductive organs, and secondary sex characteristics.

Trans: Used as shorthand to mean transgender or transsexual – or sometimes to be inclusive of a wide variety of identities under the transgender umbrella. Because its meaning is not precise or widely understood, be careful when using it with audiences who may not understand what it means. Avoid unless used in a direct quote or in cases where you can clearly explain the term’s meaning in the context of your story.

Transgender: An umbrella term for people whose gender identity and/or gender expression differs from what is typically associated with the sex they were assigned at birth. People under the transgender umbrella may describe themselves using one or more of a wide variety of terms – including transgender. Some of those terms are defined below. Use the descriptive term preferred by the individual. Many transgender people are prescribed hormones by their doctors to change their bodies. Some undergo surgery as well. But not all transgender people can or will take those steps, and a transgender identity is not dependent upon medical procedures.

The Media Reference Guide also notes that terms like “biologically male” and “genetically female” are problematic because they over-simplify a very complex subject. It’s preferable to instead say “assigned male at birth,” or “assigned female at birth.” This is probably the number one thing (second to mis-gendering transgender people) that the media gets wrong. Remember: no one is born a man or a woman. Rather, these identity markers are socially constructed labels that most people conform to as they grow older.

For more on pronoun use, accurate language, preferred terms, and other important information, be sure to visit GLAAD’s Media Reference Guide.