‘Shoot for Beauty’ Restores Agency in Victims of Acid Attacks

Earlier this month, New Delhi-based photographer Rahul Saharan did something remarkable: he empowered five female victims of acid attacks by taking their photographs to reveal the beauty and strength each of these women possesses. “Shoot for Beauty” was an inspirational photoshoot that originally was intended to help victims of acid attacks feel comfortable in their own bodies again. It has since sparked a massive, international dialogue regarding violence against women.

According to Mic, “The throwing of acid is an extremely gendered crime in India, where the nonprofit Acid Survivors Trust International estimates that more than 1,000 cases involving female victims occur every year,” of this horrific treatment of women at the hands of fathers and husbands. Acid attacks, also referred to as chemical attacks and acid throwing, embody a form of control and abuse that countless women have endured. These attacks leave women horribly disfigured, and in some cases blindness, deafness, and death can occur. In addition to the physical effects of having acid thrown on them, the women who suffer from this violent form of assault are socially stigmatized, and often carry the burden of deep shame.

Saharan, like many in India and other countries, wants to put an end to acid throwing by raising awareness about acid attacks and by empowering survivors. “Shoot for Beauty” began as a small attempt to redefine beauty and restore agency in victims of acid attacks, but has grown rapidly into an international movement because of the way that it resonated with so many people around the world. “I had not thought this will get recognized by anyone beyond my Facebook friends,” Saharan explained in a phone interview with Mic. “Our only motive was to change people’s perception about beauty and make a positive statement that these women are beautiful, and so are all other women who are told they are not fair enough or thin enough.” 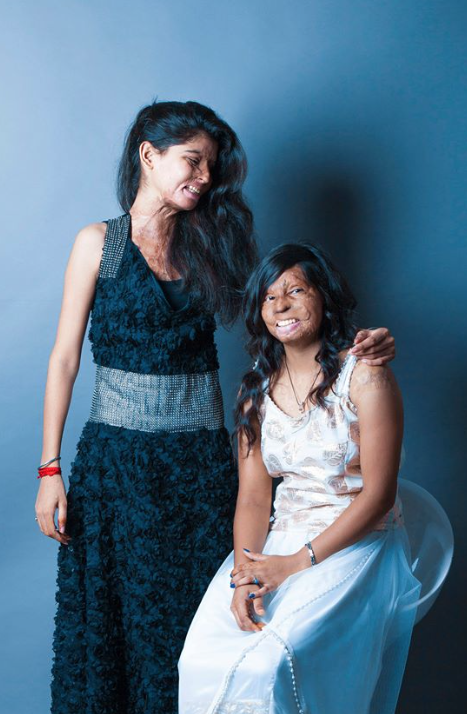 Saharan also wrote on his Facebook page, “I dedicate this shoot to every woman on earth… all of you are [beautiful] from skinny to healthy, dark to fair, tall to short, ebony to porcelain-skinned; the quirky, clumsy, shy, outgoing, and in all between so ladies live [your] life stay happy no matter who say what you are beautiful believe in it have courage to fight back if [you] stand many will follow you…Rise and shine”

For more information about acid throwing and to find resources for survivors, visit: