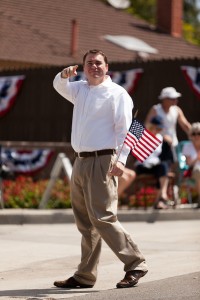 Carl DeMaio (R-CA) is running for Congress. He would be the first openly gay Republican elected to Congress. Image: Kevin Baird / Flickr

At the beginning of June, voters selected Carl DeMaio as one of the top two candidates in the blanket primary for California’s 52nd congressional district. If he is successful in his campaign, DeMaio would be the first openly gay Republican elected to Congress–marking a huge milestone for the LGBT community.

“The win sends a message to the Republican Party.” DeMaio said to his supporters on June 4th. “San Diegans are fed up and frustrated. We want the party to return to its traditional roots of standing up for personal freedoms where we allow individuals to decide social issues in the context of their own personal views on faith and family without interference from their government.”

After losing a bid and being booed at the San Diego Gay Pride Parade in 2012, this is quite the turnaround for the 39-year-old. He stated in the past that he wouldn’t “push the gay special agenda” if he were elected. However, that may be different now, as he did gain support from GOProud and the Log Cabin Republicans, two conservative LGBT groups, in his campaign this time around.

DeMaio joins the ranks of  openly gay politicians such as San Diego County District Attorney Bonnie Dumanis, a lesbian republican, won her re-election; Ken Mehlman, an openly gay man who served as a Chairman of the Republic National Committee and Campaign Manager of President Bush in 2004; and Robert Garcia, an openly gay man who is now mayor in Long Beach, Calif. Garcia is also the city’s first Latino mayor. In the past few years, support for LGBT politicians has grown immensely–hopefully we can keep the momentum going and continue to rally support for equality for all.