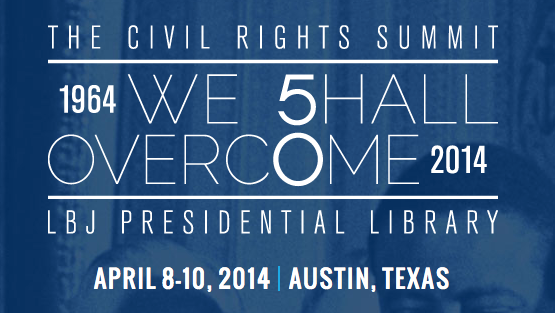 Earlier this month, the 50th annual Civil Rights Summit was held in Austin, Texas, where speakers discussed contemporary socio-political issues, LGBT rights, and equality. This year’s summit marked the 50th anniversary of the Civil Rights Act of 1964, and featured perhaps its broadest panel of speakers, as well as its broadest coverage of topics pertaining to civil rights. Two of the most prominent speakers at the 2014 Summit were attorneys David Boies and Ted Olson, whose names you might recognize for their efforts to overturn California’s Proposition 8 last year.

Though Olson and Boies, who lead the American Foundation for Equal Rights (AFER) alongside political strategist Ken Mehlman and HRC’s Chad Griffin, have opposing political backgrounds, they both agree that gay rights are civil rights. Explains Jaime Fuller for The Washington Post, “Both Olson, a conservative, and Boies, definitely not a conservative, believe that there is no legal argument to support denying LGBT couples the right to marry.” As marriage equality gained momentum in 2013, it became a political matter that no one could deny the social relevance of any longer.

Conservatives and liberals, as well as many Republicans and Democrats alike, are leaning in favor of marriage equality; it has become less of an issue affiliated with an overarching political philosophy, and more of one that speaks to civil liberties. Boies explains that for him, “Part of being a good lawyer is guessing arguments of the other side. I’m usually pretty good at that.” He candidly says, “The other side doesn’t have any good arguments. They have a bumper sticker that says marriage is between a man and a woman,” of the stubborn, shortsighted nature of those who don’t understand why marriage should be for everyone. Both Boies and Olson, like many of their colleagues and the American people, believe that gay rights are civil rights, and expressed this to a large audience at the Civil Rights Summit in Austin.

“Civil Rights” as a blanket term, has long encompassed issues pertaining to race in America. Some media commentators and folks on the blogosphere have dubbed “gay as the new black,” which is to say that the fight for LGBT rights is the Civil Rights Movement of the 21st century. However, this is a gross oversimplification of the myriad social struggles that many people within racial minorities and LGBT communities face. It also implies that our nation no longer needs to fight against embedded racism that lurks in political and social realms, which is also not true.

Many, like Olson and Boies, argue that gay rights are civil rights. This is a fine argument to make, so long as it does not overshadow the fact that our country is still battling to overcome racism, and that for LGBT people of color, contemporary political issues that pertain to the intersections of their oppressed identities complicates things even further. It is so important that people with a platform to create change like these two attorneys are raising their voices for equality and civil rights. It is equally important that we do not oversimplify the struggles that many Americans still face, and that we do not replace racial civil rights with LGBT civil rights, but rather recognize both.

What do you think? Are gay rights civil rights?