TIME Serves Up Gender Inequality in its ‘Gods of Food’ Issue 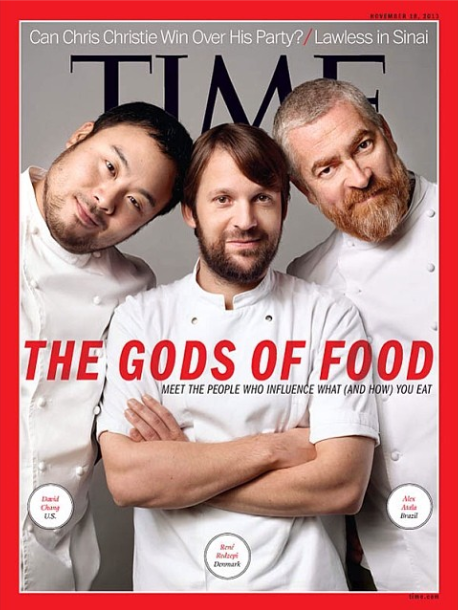 Photograph by Martin Schoeller for TIME.
Image: time via Instagram

Not too long ago, we wrote about Food and Wine Magazine’s picks for “Best Chefs of 2013,” and how only one female chef made that esteemed list. It would seem that with the amount of controversy surrounding Food and Wine’s foodie faux pas, other publications would work more diligently to increase visibility for inspiring female chefs, but sadly, this is not the case. TIME Magazine recently released an issue dubbed “The Gods of Food,” which created fantastic exposure for some of the world’s greatest culinary masters – well, the male ones anyway.

TIME’s “The Gods of Food” issue features three prominent chefs on the cover – David Chang, Alex Atala, and Rene Redzepi – and the inside feature is as much a culinary “boys club” as one might expect, given the ways in which the media loves to shine the spotlight on male chefs. There is a section devoted to the “13 Gods of Food,” and while some women are mentioned, such as coffee producer Aida Batlle, no female chefs were deemed “godly” enough to make the cut.

Similarly disturbing is TIME’s family tree-like infographic of the biggest names in the culinary world. Here, four major global influencers reside like deities at the top of the page, with dozens of their protégées and peers trickling down beneath them. The spread is informative and detailed, but it features not one single woman. When TIME’s editor Howard Chua-Eoan was asked how such an  oversight occurred, he explained, “It’s all men because men still take care of themselves. The women really need someone – if not men, themselves actually, to sort of take care of each other,” in a cringe-worthy display of overt misogyny. Chua-Eoan admittedly acknowledges the blatant lack of female inclusion, and chalks it up to not wanting to “tokenize” females in the industry. Rather, he’d like to show the culinary world for what so many powerful media outlets think it is: a boys club.

Except, the culinary world really isn’t a boys club. Female chefs have been making waves both behind the line and behind the pen in this industry for decades. They’re in kitchens, on reality television, and have earned their accolades from the same institutions that have subversively deemed their male peers “gods.” Data indicates that women make up almost half of students attending culinary schools such as the Culinary Institute of America, and there are slews of female chefs taking honors from the James Beard Foundation annually.

As chef Amanda Cohen explains, “I have not encountered any sexism in the kitchen. The media chooses not to write about women. If there’s a male chef and there’s a female chef, the journalist will always choose to talk about the male chef first,” of the continuous lack of media representation female chefs receive. Acclaimed chef and restauranteur Barbara Lynch concurs, “I used to think the fame part was a pain in the ass […] Now I will grasp the fame and the public image because I think I can inspire people. It’s not about me anymore. It’s about the next generation. We need more women in this business.”

It’s time for the media to take accountability for its gender biases, and properly report on industries where sexism only exists in the minds of those whom it benefits. Hopefully 2014 will be the year where publications like TIME and Food and Wine get it right, and where “best chef” lists will more accurately display leaders in the culinary field.