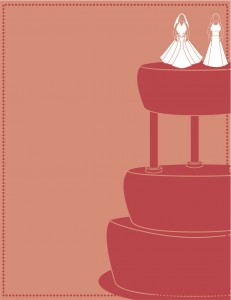 A recent legal dispute in New Mexico is covering all of the hot button bases. Freedom of speech? Check. Freedom of religion? Check. Same-sex relationships and discrimination lawsuits? Check and check.

The controversy was sparked when Vanessa Willock and Misti Collinsworth asked local photographer Elaine Huguenin to photograph them for their commitment ceremony. Huguenin turned down their request because the women were in a same-sex relationship, which she reportedly attributes to her freedom of speech and religion. Because of laws passed in New Mexico that prohibit public businesses from discriminating against LGBTs, Huguenin now faces legal action against her studio, Elane Photography.

The case is controversial for a number of reasons, but the most compelling and complicated facet is the insertion of the First Amendment, which protects one’s freedom of religion. On the one hand, the couple has a right to equal treatment, but on the other, Huguenin has a right to religion and free speech, the latter of which her case is relying heavily on.

As legal analyst Kendall Coffey pointed out in a recent interview, the founding fathers that wrote and amended the Constitution valued little more than the religious freedoms they had earned.  The value of religion and the freedom to practice whichever religion you choose is still something that deeply pervades American government and culture today. Huguenin stands by her right to religion, which she believes justifies her discrimination of same-sex couples. She says that the government cannot force her to “celebrate same-sex weddings,” because doing so goes against her religion.

It’s worth noting that same-sex marriage is not yet legal in New Mexico, and that the couple was bypassing this disappointing fact by holding a “commitment ceremony.” With this, it appears that Willock and Collinsworth have dealt with discrimination in every step of their trying to commit to one another; they cannot legally wed in their state, and have faced discrimination from their community in Huguenin’s refusal to photograph them.

While the case is a blatant example of public discrimination, it has become greatly controversial because of arguments raised about freedom of speech and religion outlined. Even as the results of the legal battle swing in favor of Willock and Collinsworth, something tells me they’ll be seeking out a different photographer for their commitment ceremony.