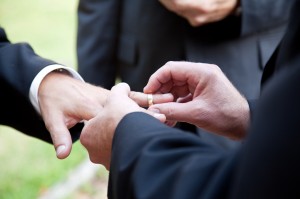 While many people across the United States were fast asleep as the clock struck midnight on the 21st of October, hundreds of same-sex couples, friends, families, and allies gathered in New Jersey to celebrate the newly instated recognition of same-sex marriage in the state. At 12:01 a.m., Cory Booker, the Mayor of Newark proclaimed, “Ladies and gentlemen, it’s officially past midnight. Marriage is equal in New Jersey!”

Booker was addressing the crowds of people who were lining up to get married at City Hall. Many of these people, like countless others in the LGBT community, have been waiting for this day for literally years, and the beaming mayor was proud to officiate the emotional event. New Jersey is now the 14th state that recognizes same-sex marriage, a development that was sparked from a ruling by Judge Mary C. Jacobsen earlier this fall.

During the early morning hours at Newark City Hall, one couple proudly held a sign between them that read: “Oscar & Gregory: After 22 years, 9 months, and 3 days, we’re married!” These newlyweds are representative of the innumerable couples that have waited decades – and even longer – to finally have their union recognized by the state they call home. Mayor Booker reportedly officiated the marriages of at least ten couples at City Hall; many major cities in New Jersey issues marriage licenses prematurely in anticipation of the amended state legislation.

Many news outlets are reporting about how now, 1/3 of Americans officially live in a place where same-sex marriage is recognized. With gay rights advocates pushing for equal marriage in other states like Oregon, Hawaii and Michigan, the day when 100% of people are free to marry their partner regardless of sex may come sooner than expected.