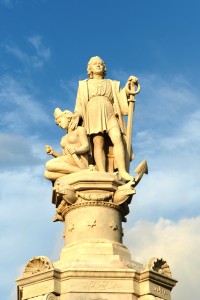 Many of us grew up learning about Christopher Columbus’ conquest and discovery of the New World in the Americas.  Columbus even has his own holiday celebrated on the second Monday in October.  Seem innocent enough?  It does until you learn more about the “explorer.”

Some states are proposing doing away with Columbus Day in favor of Native American Day.  It actually seems kind of crazy that we don’t all already have a Native American Day.  We have Black History Month and holidays for all sorts of things.  Shouldn’t we honor the people who lived in this land before all the colonists came along?

Well, California is proposing we discard the outdated Columbus Day altogether.  Democrat Roger Hernandez believes we should.  He has argued that we should adopt AB55, or the Native American Day bill to replace Columbus Day.

As yet, California actually does celebrate Native American Day, which falls on the fourth Friday in September.  In 1968, former California Gov. Ronald Reagan signed a resolution for an “American Indian Day.” In 1998, AB 1953 was passed into law by the California Assembly, making Native American Day an official state holiday.

Neither Native American Day nor Columbus Day is a paid holiday for government employees.  Columbus Day used to be until the recession hit California, and it was eliminated in 2009.

If Hernandez’ bill passes, it would make Native American Day a paid holiday and do away with the State’s day and Columbus Day.  State employees would get the day off as well.

Some states have decided not to celebrate or honor Columbus Day, including South Dakota, Hawaii and Alaska.  Perhaps they believe you can’t discover something which is already inhabited by groups of people.  America was not just a barren rock.  (South Dakota legally changed the name of Columbus Day to Native American Day in 1990.)

The day has been observed since 1792, but officially was recognized as a holiday in 1905 by a group of Italian Americans as a way to avoid prejudice.  The immigrants wanted to create some sort of cultural heritage in a country that thought of them as outsiders.

“After an 1891 lynching of Italians in New Orleans, a New York Times editorial proclaimed Sicilians ‘a pest without mitigation,’ adding, for good measure, that ‘our own rattlesnakes are as good citizens as they.’”

So, what’s all the fuss about?  Here are the facts:

For an entertaining and visual recap of Columbus’s “accomplishments,” be sure to check out this comic from The Oatmeal.