The U.S. Republican Party has a longstanding history of using racist strategies to influence public policy. Of course, to accuse each and every Republican of being racist is much like trying to prove that zero racism exists in the Democratic Party; it simply isn’t possible. However, just because not every Republican is racist, doesn’t mean that the party as a whole doesn’t have a sordid history of implementing racist political strategies. There is proof that it has, and contemporary attitudes about race continue to pervade society today.

One such tactic is known as “the southern strategy,” which The Washington Post says “started under Richard M. Nixon in 1968, and described Republican efforts to use race as a wedge issue – on matters such as desegregation and busing – to appeal to white southern voters.” Despite how far our country has come in terms of racial equality, systemic American racism continues to permeate politics and human rights in this country every single day. 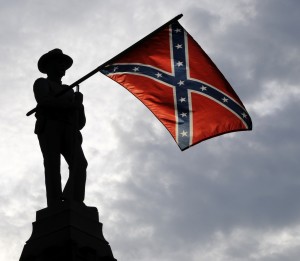 The confederate flag is a symbol of flagrant racism in our country’s past.
Image: Shutterstock

A recent example of political racism was manifested at our nation’s Capital, where Republican speakers such as Sarah Palin and Ted Cruz refused to admonish a protestor who proudly waved a confederate flag. The flag itself is a symbol of flagrant racism in our country’s past, and as Morgan Whitaker for MSNBC explains, “For a party that needs to win over minority voters, and convince people that its criticism of the president is not racially-motivated, the images of that flag are not helping. It’s not hard to track how the Republican party went from being early supporters of civil rights to being associated with the stars and bars.”

Democratic strategist Jimmy Williams concurs, and further explains the deep-seated racism that is broadcasted in the Republican Party’s refusal to speak out against the use of the Confederate flag. He recently said, “To take that flag, and fly it in front of the White House, that has in it the first African-American president of this country, is patently offensive, is blatantly and overtly racist, and it has zero to do with southern heritage and southern pride.” Williams goes on to call the waving of this flag a “modern day southern strategy,” drawing parallels to former Republican strategies and contemporary Party views.

To reiterate and earlier point, it is critical to note that racism is a complex, contemporarily relevant issue that is deeply embedded in our country’s past and present. It is also important to consider that not all Republicans are motivated by racist ideals. In fact, prominent Republican strategist Kenneth Mehlman has publicly rebuked his fellow party members for their blatantly racist application to political tactics. During his time served as chair for the Republican National Convention, Mehlman said, “Some Republicans gave up on winning the African American vote, looking the other way or trying to benefit politically from racial polarization. I am here today as the Republican chairman to tell you we were wrong,” explaining how detrimental it is for political parties to be so racially polarized.

Although the Civil Rights Movement has paved the way for racial justice in the United States, recent issues – “Stop and Frisk,” the Trayvon Martin controversy, and the proud spectacle of the Confederate Flag, to name a few – illustrate a systemic American racism that pervades our society. It is imperative to understand the strategic racial motivations that drive policy making by our country’s political parties.